Left Tackle Tyron Smith just can't seem to escape the injury bug. From 2016 to 2019, Smith missed three games per season. 2020 was his worst year when it comes to injuries as he missed 14 games due to having surgery to fix a neck issue. Smith vowed to play all 17 games this season, but it hasn't worked out that way.

Smith injured his ankle against the New England Patriots a month ago. A week later, Smith gutted it out when the Dallas Cowboys took on the Minnesota Vikings but played a season-low 31 snaps. He's missed the Cowboys' last two games. Smith has gradually improved this week although he's been a limited participant, and if he doesn't have any setbacks on Saturday, he could play on Sunday against the Kansas City Chiefs.

Terence Steele has started the last two games at left tackle and he's been serviceable in Smith's absence. However, Smith is a future Hall of Famer, and when he's healthy, he's still one of the top left tackles in football and he gives stability to the Cowboys' offensive line and protection to the blindside of Dak Prescott that Steele can't.

“He looks good,” McCarthy said about Smith's performance during the week. “He has felt good about his work.”

Getting Smith back would be huge for the Cowboys especially with such a tough test like the Chiefs on the horizon. More than likely, Prescott will have to put up a lot of points for the Cowboys to get a win, and having his perennial Pro Bowl left tackle back will make life much easier in making that happen. 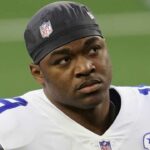 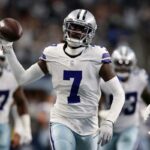