Cowboys Hoping for Balanced Performance on Special Teams in 2022

We've been rolling through the Cowboys roster in our 2022 training camp previews, and today we're going to look at special teams. Dallas currently enjoys stability at punter and long snapper and hopes that a change at kicker will bring balance to the group.

You have punter Bryan Anger and Jake McQuaide at long snapper on one end of the spectrum. They joined the Cowboys last year and did everything you could have wanted; Anger went to the Pro Bowl and McQuaide continued the legacy of L.P. Ladouceur with flawless work in his role.

It was a far different story at kicker in 2021. Greg Zuerlein was again one of the least accurate in the NFL and wound up being released this offseason.

Dallas is taking a far different approach this year, foregoing veteran experience and seeing who emerges between UDFA Jonathan Garibay and the barely-seen Lirim Hajrullah. Neither is a sure thing for next season but at least the bar was set fairly low by their predecessor.

While we'll never point to these positions first in our analysis of a football team, their impact has been consistently underrated. Zuerlein missed field goals against the Bucs, Raiders, and Cardinals last year, all games Dallas lost by three points or less. One bad punt can be a disaster for field position and a bad long snap is often more devastating than an offensive turnover.

The 2022 Cowboys are looking to do more than bully the NFC East and make another brief playoff appearance. Getting back to the mountaintop won't happen if these special teams positions aren't solvent. We seem to be in a good place at punter and long snapper; hopefully one of the fresh faces at kicker brings that spot back up to snuff as well.

We'll see if Dallas adds any camp bodies at punter and long snapper to take some reps off the veterans. Anger and McQuaide are 33 and 34, respectively, so reducing their workload is rarely a bad idea. But no matter who else the Cowboys might bring to Oxnard next week there's no true competition happening.

That leaves us with the kicker situation. Garibay was Dallas' only kicker for about two months before the recent signing of Hajrullahu. Now we wait to see how both perform in camp to know how much of an actual competition exists.

You may recall that this isn't Hajrullahu's first stint in Dallas. He was here last August to fill in while Zuerlein and Hunter Niswander were both injured. He was brought back for a single game when Zuerlein missed a game due to COVID-19, going 5-for-5 on extra points during the Cowboys' rout of the Atlanta Falcons.

Hajrullahu is already 32 years old, having spent most of his career in the Canadian Football League. If Garibay hits the ground running then Dallas will have more incentive to continue working with him this season and beyond; a clear edge in any potential competition between the two.

Ultimately the Cowboys will go with whoever gives them the best chance to win now. Zuerlein's had too much blood on his foot the last two seasons; it's time for something better and more reliable at kicker. 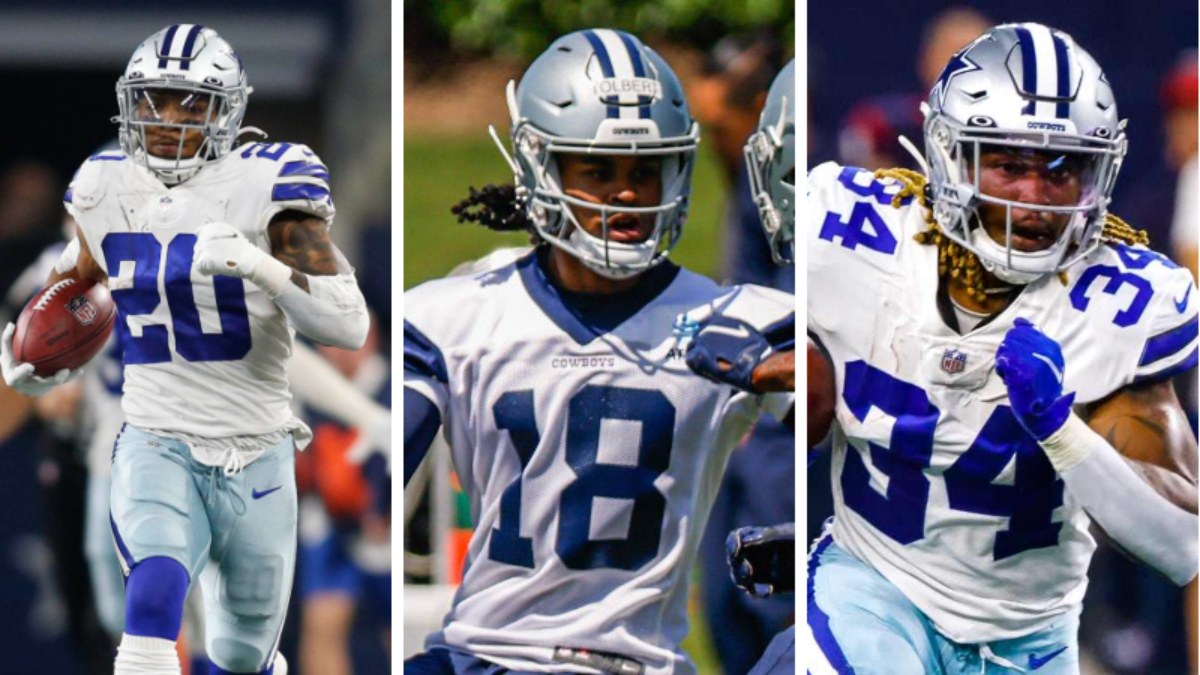 Again, we don't know how much competition will truly exist at kicker. It could be over in a week if one quickly outshines the other; both players are still quite mysterious and it all remains to be seen.

Instead, let's turn our attention to other mysteries of kick and punt return duties. Who will be the primaries in these roles in 2022?

Kick returner is likely still Tony Pollard. But given his upcoming free agency and increasing offensive role, both he and the Cowboys may be reluctant to use him as KR as much as they have been.

If he's healthy again and hasn't lost anything from the past, Rico Dowdle may be your guy. The third-year prospect was a budding special teams stud both as KR and on coverage units before his hip injury last year. We'll see if he's able to come back all the way and continue carving out a role.

As for punt returning, Cedrick Wilson's taken his talents to South Beach and CeeDee Lamb's now the team's clear number-one receiver. Dallas will have to explore new options for the job this year and may already have a front-runner in one of its new wide receivers.

3rd-round pick Jalen Tolbert was getting work at PR during OTAs and minicamps last month. While not a role he handled in college, Tolbert was reportedly handling the role well in June and would seem to now be the favorite for next season.

If the Cowboys are desperate to get the ball in Tony Pollard's hands more, and they have good reason to be, this is another spot where it could happen. We even saw Trevon Diggs get a couple of opportunities at it last year. And while it's a risk they may not take lightly, Lamb is still an option as well.

There have been times when Dallas uses certain players situationally, either with the hope of a big play or just putting someone out there they trust to make a fair catch. That variety may exist again in 2022, but these jobs are both up for grabs and will be interesting to track in this year's camp.

Jess Haynie
Cowboys fan since 1992, blogger since 2011. Bringing you the objectivity of an outside perspective with the passion of a die-hard fan. I love to talk to my readers, so please comment on any article and I'll be sure to respond!
Previous article
Countdown to Kickoff: It’s a Lewis And Lee Vibe at #50
Next article
Is Mike McCarthy on the Hot Seat This Season?

In a critical playoff game against the Tampa Bay Buccaneers, the Dallas Cowboys scored a total of five touchdowns (all completed by Quarterback Dak...
Cowboys News

On August 9, 2022, the Dallas Cowboys signed Brett Maher after releasing Jonathan Garibay to compete for the kicking position. The signing left us, including...