After hitting a 63-yard field goal last night in the Dallas Cowboys' win over the Philadelphia Eagles, Kicker Brett Maher now owns the NFL record for most field goal made at 60 yards or longer. It was the third 60-plus FG of his career and second so far this season.

Maher hit a 62-yarder last week in Dallas' loss to the New York Jets. That kick tied him with Sebastian Janikowski and Greg Zuerlein for having two career field goals of 60 or more.

If Brett Maher ever gets a chance to kick in Denver, he may have a great shot at breaking Prater's record as well. According to NBC's data from last night, Maher's kick would have been good from 66 yards out.

It was a good night overall for the Cowboys kicker. Maher had two other makes from 26 and 29 yards.

Despite his heroics at times, Brett Maher has been one of the least accurate kickers in the NFL the last two years. Even after last night Brett is hitting just 71.4% of his field goals so far in 2019; that ties him for 25th in the league.

The most puzzling aspect of all with Maher is how much he struggles with shorter range kicks. You almost have more confidence in him kicking from 60 yards out than attempting an extra point.

Few kickers could survive that kind of performance and uncertainty, but few can do what Maher can with his long range ability. It's a risk/reward situation that the Cowboys are continuing to work with.

For today, at least, Maher and his team are basking in the glory of a great game. Let's hope both can keep up the positive momentum.

Brett Maher is numba one, y’all! Give ‘er up! 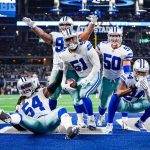 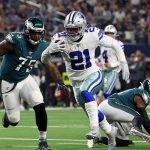