Well don’t look now but the Dallas Cowboys are in control of their division and anything short of a catastrophic collapse will see them hosting the first round of the playoffs. Dallas strengthened their grip on the NFC East by knocking off a divisional rival and the reigning Super Bowl champions with a 29-23 overtime win over the Eagles.

Those who have a favorite online sportsbook and wagered on the Cowboys were ecstatic to see Dak Prescott hit Amari Cooper for a 15-yard touchdown pass in overtime, thus covering the 3 ½ point impost that oddsmakers hung on Dallas.

The Cowboys have now won five consecutive games, with three of those over divisional opponents Philadelphia (twice) and Washington. But before we celebrate, we must consider that there's still a mathematical possibility of either Philadelphia or Washington stealing the division crown away from the Cowboys.

The Giants' only hope is an outside shot at a wildcard berth if they win outright but they've been eliminated from contending for a division title due to their 1-4 record against NFC East teams.

Essentially, all the Cowboys must do is win one of their three remaining games in order to celebrate a division crown. If Philadelphia or Washington loses any of their three games they will be out due to tie breakers that go in the Cowboys’ favor.

As of this moment, the Redskins are a disaster with no one under center to captain their rudderless ship, and the Eagles must defeat the Rams in LA, which would be considered a stunning upset seeing as any reputable online sportsbook is offering the Rams as 9 ½ point favorites as of this writing; then they must win at home against Houston and on the road against the Redskins.

Of course, the Cowboys are counting only on themselves to reel in the division title and with games at Indianapolis, home against the Bucs, and wrapping their season in New Jersey against the Giants, at least one win seems likely.

The addition of Amari Cooper to the Dallas offensive arsenal has been a game-changer as the former Oakland Raider hauled in 10 of 13 targets for 217 yards and three touchdowns, including the game-winner last Sunday against Philadelphia. He was the top-tier receiver Prescott had been lacking and his presence on the field improves both the passing game and running game by virtue of his dynamic playmaking abilities. Ezekiel Elliott has eclipsed the century mark in rushing yards in four of the six games since Cooper has been on the Cowboys roster.

Furthermore, Dallas has averaged 24.4 points per game over their last five wins with Cooper in the lineup, which is more than five points improved from where they were prior to their winning streak without him in a Dallas uniform.

In addition, Prescott has morphed from a game manager at 202 passing yards per game to a game breaker as evidenced by his 285.7 passing yard average in six games with his new target at his disposal.

Ultimately, the Cowboys will be tasked with turning all of this good mojo into a deep run into the postseason. We can now confidently say that there is one other team to consider besides the Rams, Bears, and Saints as this year’s NFC entrant into the Super Bowl. However, Dak Prescott will need to eliminate turnovers and interceptions if Dallas is truly going to contend against the powerhouses they will face in the playoffs.

Last Sunday, Prescott caught fire in the fourth quarter and ended with 455 yards passing, connecting on 42 of 54 passes with three touchdowns, but his two interceptions were converted into nine points by Philadelphia. As we move forward, Prescott will need to lead right from the get-go and understand that one poor decision can cost his team what is now a realistic shot at a championship season. 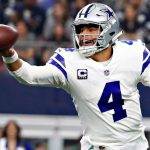 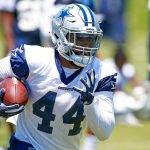