Probably one of my favorite things about this time of the year is attempting to figure out which rookies from the most recent draft class will have the opportunity to make a statement during their first season in the NFL. As an NFL franchise, you hope that several, if not all of your draft picks are able to make your opening week 53-man roster and make significant impacts during the regular season.

With the way the Dallas Cowboys have drafted in the last four or five years, we’ve grown accustomed to first-year players showing out in their rookie seasons. This time of year creates all kinds of speculation toward that end.

The downside to this time of year is that there isn’t a ton to talk about. Most of what is going on is speculation into how the team will look when they take the field week one.

It’s that time of the NFL year when there’s not a whole lot going on and EA Sports drops their Madden ratings out for the world to peruse and criticize. Like every year, there are always ratings that make you go, “huh?” and this year is no different.

Tank is 89 rating on Madden, how? 😳 pic.twitter.com/NoGNXDvM3E

The fact that DeMarcus Lawrences is rated only an 89 on Madden 20 is just further evidence to how underappreciated he is around the NFL and those who follow the NFL. Even in the Dallas Cowboys fanbase, Lawrence isn’t considered to be the same level of player that Khalil Mack or Von Miller is, but if you look at the totality of the numbers, you find that Tank’s been every bit as productive and disruptive as those guys have been. 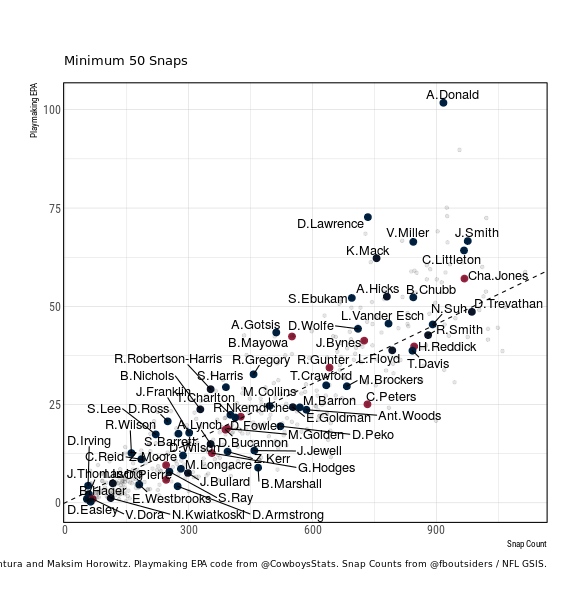 As you can see from the chart above, in fewer snaps, DeMarcus Lawrence had a greater playmaking EPA over the course of the 2018 season than Khalil Mack and Von Miller. Aaron Donald had a higher playmaking EPA and should be rated higher than Lawrence, but I have a really hard time with Lawrence being rated anything less than a 95.

Though he may not have had as many sacks as Mack or either of the Watt brothers, Lawrence finished tied for fourth among edge rushers in Pro Football Focus’ “stops” metric, which is defined as a play that results in a loss for the defense. Could be a tackle for a loss, a tackle that didn’t achieve the expected yards for the down and distance, a sack, a batted pass, an interception, a tackle that forced a fourth down.

Lawrence is one of those players that does everything really, really well. He’s one of the most well-rounded players on the defensive side of the football as he doesn’t lack in his ability to play the run or rush the passer.

His ability to disrupt the run and pass game at an equally elite level goes beyond what you see in a boxscore. Oh, and his boxscore is really really good too. Though many Cowboys’ fans were unsure if Lawrence was worth the $21 million per year and $60 million guaranteed that he received this offseason, I’ve never wavered in my belief that you should feel comfortable paying DeMarcus Lawrence like an elite edge player, because he’s an elite edge player.

Do you have any rookies besides Hill and McGovern making the team?

Mike followed up this question by also including Tony Pollard, so I won’t touch on that one much except to say that I’m really excited to see what Pollard could do with 5-10 touches per game behind this offensive line. He’s such an explosive player with the ball in his hands that you want to work to get the ball in his hands.

So, besides Trysten Hill, Connor McGovern, and Tony Pollard, which rookies do I see making the team in 2019? Well in my most recent 53-man roster projection, I included Mike Jackson, the cornerback out of Miami who the Dallas Cowboys selected in the fifth round as well as Donovan Wilson, the Texas A&M safety, their sixth-round draft pick.

I think both of those players will have an excellent shot to make the roster out of training camp and Wilson, in particular, could find himself with a significant role with the defense if he’s able to translate his collegiate playmaking ability to the NFL. He was an excellent tackler and ball-hawking safety and if there’s one thing that was evident in 2018, the team needs better tackling from its other safety not named Xavier Woods.

It’s going to be very difficult for any of the rookie defensive linemen or wide receivers to make the roster out of training camp because there is already tremendous depth there.

Training camp generally leads to the hype machines getting out of control for undrafted free agent wide receivers and this year will be no different with playmakers Jalen Guyton and Jon’vea Johnson ready to shine. The difficulty is that they’ll have to be significantly better than veterans Tavon Austin, Allen Hurns, and Noah Brown to force the team to move on from players they covet and trust.

Training camp is now less than two weeks away and as it draws closer, the excitement of Cowboys Nation will begin to boil over. This is a squad that has the talent and depth to be a contender. We’re finally getting closer to being able to see that talent on the field instead of just talking about it.

If you have a question you’d like to see featured in our weekly mailbag, leave it in the comments, reply to the Inside The Star Facebook page, or send it to John via Twitter.