Cowboys Offense Vs. Panthers Could Resemble Pass-Heavy Opener at Bucs

Through three weeks, the Dallas Cowboys offense has shown they can adjust to any game plan. Kellen Moore has an unselfish cast of pass catchers and running backs to feature every game, leading the Cowboys to a 2-1 record ahead of Sunday's home game vs. the Panthers.

Dak Prescott matched his career high with 58 attempts in the season opening loss at Tampa Bay, and may be in for another week of airing it out against Carolina. The Cowboys have won back to back games against the Chargers and Eagles with 29 carries for Ezekiel Elliott and Tony Pollard in Los Angeles and 28 more on Monday night. Where the Chargers looked to slow the game down to limit the Cowboys possessions, their rushing output against the Eagles can be attributed to playing from ahead most of the game.

Playing against Tom Brady and the Bucs was a challenge unlike the Cowboys have faced again in the early going of 2021 – and they won't this week against Sam Darnold. Needing to throw the ball and score quickly was the goal, and the Cowboys did so to take the lead late in the fourth. Though Darnold won his last start against Dallas with the Jets in 2019, it's the Panthers stout run defense that could force the Cowboys hand Sunday.

The 2000 Ravens are widely considered the best modern run defense of all time for only allowing 970 total rushing yards in a 16-game season.

In this year’s 17-game season, the Panthers are on pace to beat that by 200 yards.

No team has even cracked 50 total on them yet.

Elliott and Pollard will give the Panthers a challenge they haven't faced against the Jets, Saints, or Texans. Defensive tackles Derrick Brown and DaQuan Jones have held the line of scrimmage for Carolina while linebackers Shaq Thompson and Haason Reddick clean up plays all over the field. The Jets attempted just 17 runs between Tevin Coleman, Michael Carter, and Ty Johnson in their loss to the Panthers. The Saints handed the ball off 11 times for 12 yards in week two, while the Texans did nothing to help QB David Mills in his first start – running it 15 times for 37 yards.

As one of the four remaining unbeaten teams, the Panthers lead the league in total yards and yards per game allowed both on the ground and through the air. Where the Cowboys may have felt forced to throw the ball at a high rate in week one, throwing it against the Panthers to try and build an early lead could put the Carolina offense in a tougher spot.

Playing without star RB Christian McCaffrey, the Panthers have weapons on the outside with DJ Moore and Robby Anderson, but Darnold can be forced into mistakes when pressured. The Cowboys have gotten great safety play from Jayron Kearse and Damontae Kazee, and will need more of the same to force the Panthers into moving the ball with short passes. 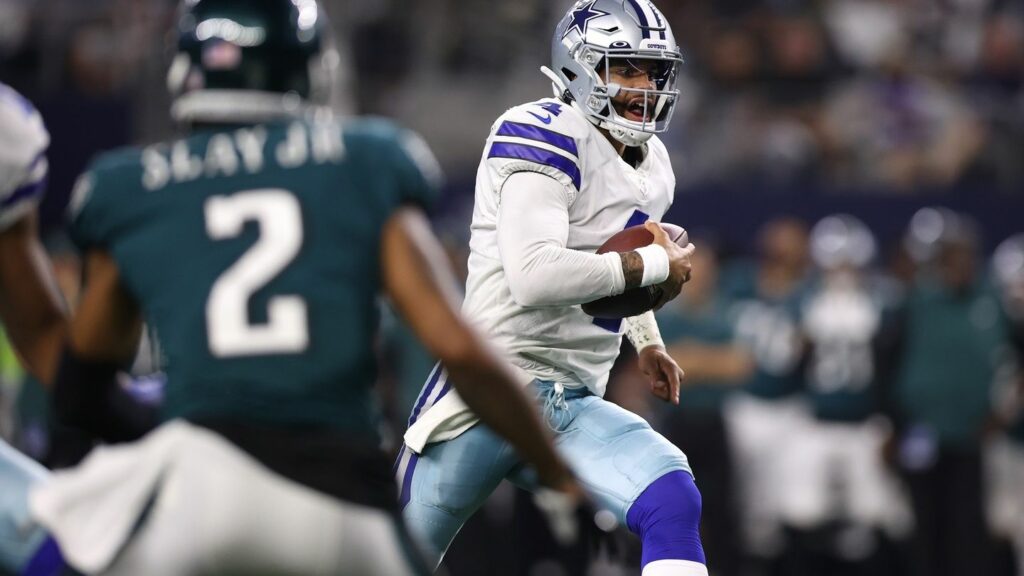 There's also a large section on Kellen Moore's play sheet that should read “passes that work as runs”, with Prescott consistently delivering strikes on short yardage throws that allow for YAC. The confidence the Cowboys have in the full depths of their offense is at an all-time high right now, with Prescott drawing comparisons to Peyton Manning and Drew Brees from this week's opposing coach Matt Rhule.

‘Panthers defense vs. Cowboys offense' is a juicy headline for this battle of division leaders in the early window on Sunday, but Dallas has proven they can scheme for however the game plays out. A shootout between Prescott and Darnold would favor the Cowboys heavily, especially considering the Cowboys streak of takeaways on defense to give Dak extra possessions. The Panthers may very well come out of this game still feeling great about their run defense, but worse about their ability to leverage it against one of the league's best offenses to win on the road.

I don’t think the Panthers D-line at all compares to the Bucs. Plus we have Z Martin back and an improving T Steele. I trust that OC Moore (who has done a great job game planning) will devise the right plan for this offense to continue being successful. A balanced attacked is always preferable. I’m not sure we will see another pass heavy game like the Bucs one. But if need be, I think Dak can light it up like he did against the Bucs.

It looks like the Panthers have not played better teams so far. I think we will be able to run against them. I like the balanced attack, keeping the opposition guessing and eating the clock. Plus they are down their best player. I see a W in our future.

We need to come in and establish the run with EE and TP set the tone early then we should be able to throw the ball all over the place! We have to come in hungry EVERY GAME and not get complacent with a win here and a win there!

I’m not worried, they’re first or close to first in all the important categories for a D, but that’s against the Jets (UGHH) the Saints though Kamara is great, but I’ve seen him fold when team’s get physical with, and he doesn’t seem the same since Brees retired, and the Texans (UGHHH)

None of those teams, including the Saints are close to our Offense at least so far this season

They also don’t have McCaffrey on Offense so if we lose, it’s gonna be cuz we couldn’t stop Sam Darnold, which would be a joke

Hard not to have flashbacks to that Jets game on the road against Darnold, but I agree. Thank you for reading!

I think the only reason the panthers are 3-0 right now is cause they haven’t played a good team yet!! The best team they’ve played so far was the saints and they aren’t near as good without Drew Brees, not to mention the fact that they had to go play the panthers without at least 7 of their coaches, so the saints pretty much gave that game away!! I’m not saying they would’ve beat the panthers if they had all of their coaches, but they would have made it a better game!! But this week they have to come play us at our home and they’ll have to play against one of the best offenses in the league and the number one defense in takeaways!! I can’t say we’re the best yet, but we are definitely better than any of the teams the panthers have played against so far!! And with them having to play without Christian McCaffrey and Jaycee Horn, I think we have a good chance of winning this game too!!