In more ways than one, the Dallas Cowboys are going in a new direction with their linebackers this season. Ben Bloom has taken over as the primary coach at the position, while Passing Game Coordinator Kris Richard also expects to heavily influence the unit. Short on numbers and proven talent prior to the draft, the Cowboys added 19th overall pick Leighton Vander Esch and 193rd overall pick Chris Covington.

Also signing veteran Joe Thomas to join projected starters Sean Lee and Jaylon Smith, one journeyman player has caught the eye of those around The Star for the Cowboys OTAs. With only mini camp standing in the way of the Cowboys and another competitive training camp, Justin March-Lillard has made a strong impression in staking his claim for a fringe roster spot.

March-Lillard was a mid-season addition by the Cowboys in 2017, as Dallas became his fourth team since the start of last September. Appearing in seven games, more than he ever did in one season for the Chiefs, Dolphins, or Seahawks since 2015, March-Lillard was exclusively a special teams player for the Cowboys.

This role bodes well for a spot on the current Cowboys roster, as their 90-man squad still leaves plenty of intrigue for who will replace former ST aces like Keith Smith and Kyle Wilber. Both players were of course also backups at linebacker.

Covering the Cowboys OTAs with his usual scout's eye for detail, Bryan Broaddus listed March-Lillard as one of ten “offseason surprises”, for being counted on to, “always be around the ball”.

Going all the way back to my original scouting report on March-Lillard, his Sean's Scout described him as follows:

“Not a player that is going to overwhelm with his physique or powerful play, March-Lillard puts himself in position to make plays on the ball by diagnosing plays quickly and consistently playing with his eyes, feet, and hands in sync.”

Shaking off the rust of a long offseason without pads on during OTAs is the perfect time for a player like March-Lillard to shine, and he was able to do just that before the competition ramps up.

It may not be the other linebackers on the Cowboys roster that March-Lillard is competing with, so much as any fringe players on the roster, all working towards spots on a final 53-man team. If March-Lillard makes the 53, there is no reason not to think he doesn't continue making the 46-man active roster for the Cowboys on game days.

OTA 9. Shouts out Justin March-Lillard, who had himself a day running with the first-team D. Recovered a Dak Prescott fumble in the red zone, and broke up a goal line pass to get a big stop for the defense #cowboyswire

A linebacker that can cover ground in a hurry and react against the pass with sound tackling form, March-Lillard's skill set is ideal for the Cowboys developing approach at the position. As mentioned, both coach Bloom and Richard will mold this unit led by Sean Lee – who simply does it all when available for this Cowboys defense.

The same will hopefully be said about Jaylon Smith for the remainder of the offseason, as the Notre Dame product is off to a solid start in his continued return from injury.

Hinting at a move to the strong side, while working Smith as a pass rusher in practices too, the Cowboys are honing in on how to best utilize the physical specimen that is Jaylon.

If this means a reduced role for Smith, playing as an enforcer against the run while conceding Nickel snaps to first-round pick Leighton Vander Esch, it means only good things for Justin March-Lillard.

Comparing the 19th overall pick of this draft to an undrafted player out of Akron from 2015 would be unfair to both, but when the Cowboys deploy just two linebackers there will be plenty of players fighting for one spot.

Instinctive athletes like LVE or March-Lillard lining up alongside Lee is an ideal way for the Cowboys to improve their overall passing defense — consistently expecting to create pressure with their front four while keeping everything in front of Richard's talented back seven.

It is a linebacker and secondary group with so much talent for the Cowboys that good players, with a real chance to stick elsewhere, will undoubtedly have to be moved on from. Such would be nothing new for Justin March-Lillard, who is also set on making Dallas his first real landing spot in the NFL.

March-Lillard will be fighting for this at the perfect time, entering his fourth season in the league for a team whose only other LBs with as much experience are Sean Lee and Damien Wilson.

We're still a long way from knowing what most of the Cowboys roster will look like for the 2018 season. With a first round pick invested at linebacker, this is going to be a group that gets extra attention from now until week one though – as players like Justin March-Lillard fight to keep their name in contention.

I don’t want personal feelings for “the godbacker”, Jaylon Smith & his truly feel-good story to be a blind spot for the best package for the Dallas Cowboys
But if he’s truly improved & improving, then it’s only sensible that he leads in rank under general Sean Lee
&
Since I began my comment as I did,
I quite honestly shouldn’t pencil in Lee , that’s if we truly desire the absolute best for Dem Boys
But
The rookie LVE & Liliard-March are behind Smith in hands on experience in dallas’ scheme & need to supplant those who have been acclimated already
Why are we so sure LVE is a day 1 starter over Smith at MLB & why is he not assumed better than Lee?

Competition is awesome but let it run its course
Shouldn’t we want LVE to replace Lee and have Lee in a more reserve role for health issues as we use to validate LVE automatically replacing Smith?
I’m just being as open with Lee as everyone is with Smith
Smith is in his way up & Lee is being eased along
Enough said
I hope all 3 : LVE, Smith & Lee can cause the coaching staff to go 3LB set 80% of the time but with the ultimate production
Dallas went 6 DB set against an early opponent last year with much success
Being creative & thinking outside the box
&
Leading the NFL instead of copycatting as one article Saudi our rich history should allow us to employ & deploy our absolute best 53 men regress if what’s being do e around the league
Linebacker is truly a legitimate need due to lack of quite depth
May the cream rise to the top & let no coach or owner stir it back up
GO COWBOYS ! ! ! 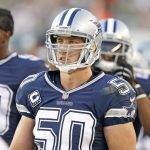 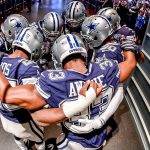