Dallas Cowboys new Defensive Coordinator Dan Quinn has only been a part of the coaching staff for a short time and Special Teams Coach John Fassel hasn’t been here much longer, but already it seems as if they’re heavily involved in the Cowboys personal decision-making. In fact, it’s clearly evident their voices carry quite a bit of weight in the offseason moves made already.

Unless you’ve been paying particularly close attention to the Dallas Cowboys you probably haven’t noticed the kind of impact both Dan Quinn and John Fassel seem to have had on personnel decisions. But, if you take a little time to look things over you’d more than likely notice the same thing I did. They are both a big part of building Dallas’ 2021 roster.

Let me show you what I mean… 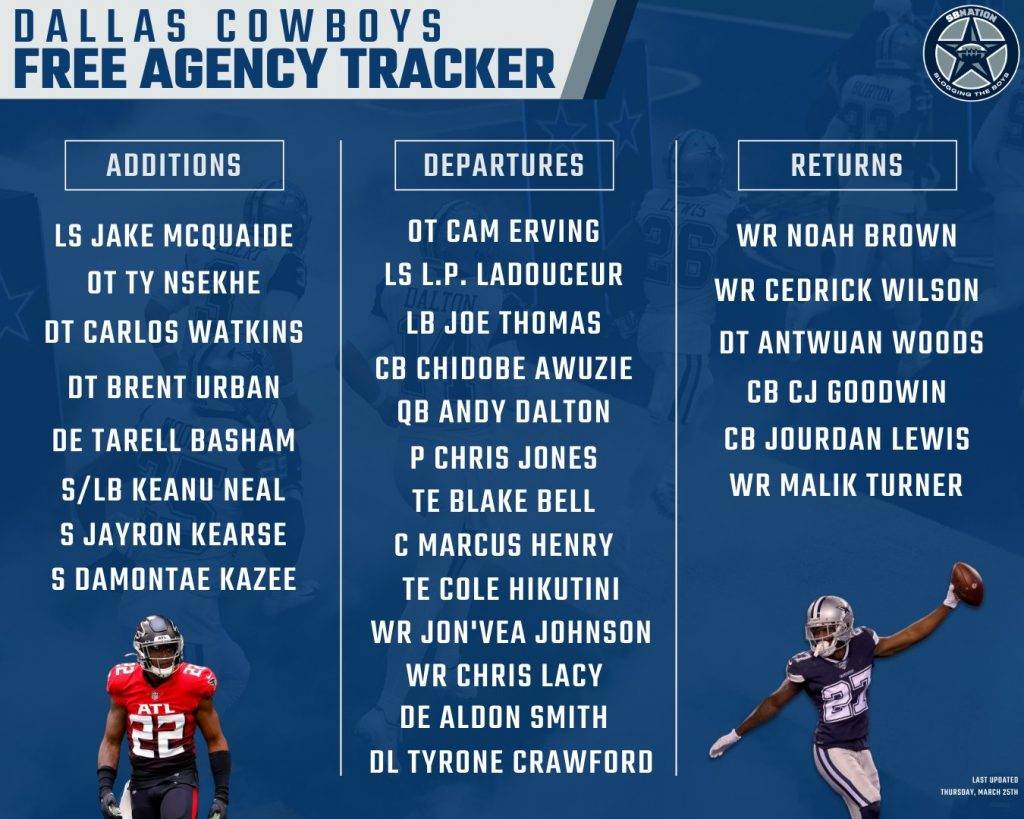 Thanks to this handy-dandy free agency tracker courtesy of Blogging The Boys we can group all of the Dallas Cowboys moves together in one place by additions, departures, and returns. For most this is just a list of the typical offseason moves, but to me it signifies something else entirely. For me, it proves Dallas’ assistant coaches are without a doubt heavily involved and I can prove it.

In a little over a year with the Dallas Cowboys John Fassel has pretty much completely made over the core of Dallas’ special teams. During his short time with the Cowboys he’s found a new punter in Hunter Niswander and brought in his own preferred kicker (Greg Zuerlein) and Long Snapper (Jake McQuaide). If that’s not enough evidence he’s got some pull in personnel decisions then just take a look at some of the other offseason moves already made.

The decision to re-sign Cedrick Wilson, Noah Brown, Malik Turner, and especially C.J. Goodwin were all more than likely done with special teams in mind. Jourdan Lewis could factor into that as well, even though his special teams snaps have diminished recently. Then there’s the signing of Jayron Kearse. Special teams is the area of his game where he provides the most value. Add it all up and you can see for yourself people are listening when Fassel speaks.

It’s only been a few months since Dan Quinn has taken over as the defensive coordinator for the Dallas Cowboys, but already it’s pretty evident the organization values his input. In such a short time it looks as if he’s not only bringing with him some of his former players to hopefully upgrade Dallas’ defense, but also changing the Cowboys philosophy in free agency as well. I think that’s pretty clear by the way they went after free agent safeties.

In the past Dallas has almost completely ignored or bombed upgrading the safety position via free agency. Over the past few years the Cowboys FA safety additions were for players who’s skill set was already on the decline. Quinn on the other hand has targeted players still in their prime who could very well step in and start Day 1. I think this is something to be excited about and it’s really going to be interesting to see how much weight his voice carries on the Draft Day.

I don’t know what all of you think about Dallas’ assistant coaches having more influence in regards to personnel decisions, but I personally like it. Under Jason Garrett I didn’t ever get the sense this type of thing was happening. With Mike McCarthy running the show now it seems as if his coaching staff has more of a voice in how they would like to see the roster shaped. Hopefully it pays off, but only time will tell.