On the first play of the game, Dak Prescott threw an interception on his first pass attempt for the first time in his career. The throw, on an RPO, was picked by New York Giants Safety Antoine Bethea. The Dallas defense was able to hold from within their own 10-yard line, but the Giants were able to take the lead with a field goal early on.

Later in the first quarter, the Cowboys looked to have a go-ahead touchdown from Dak Prescott to Randall Cobb, but a questionable holding call on Tyron Smith put the Cowboys behind the chains facing a 2nd a 15. A drop by Tony Pollard on a screen play that was nicely set up brought up 3rd and 15 and the Cowboys were unable to convert. Brett Maher came in and tied the game at three apiece.

In the second quarter, the Cowboys suffered another turnover on the drive following a New York Giants touchdown. Giants Safety Jabril Peppers knocked the ball loose from Randall Cobb as he was spinning in an attempt to pick up the first down. For most of the first half, turnovers and penalties were the difference in the game.

Despite giving up 12 points in the first half, the defense was playing fairly well. They forced two Giants field goals after New York got the ball in the Red Zone.

Late in the first half with the Cowboys trailing the Giants by nine points, the Cowboys got a big 42 yard catch and run from Tight End Blake Jarwin to get them within two points. After an Xavier Woods interception on the Giants' next drive, the Cowboys were able to get into position for Brett Maher to kick a last-second field goal at the end of the half. The Cowboys never trailed after Brett Maher's 52-yard field goal that made it 13-12.

The second half of the game was all Dallas as they outscored the Giants 24-6 to close out the game. They got big plays from Michael Gallup and Amari Cooper to extend the lead and Ezekiel Elliott and the running game was excellent all night.

The defense came up big throughout the game limiting Saquon Barkley to 28 yards on 14 carries. Barkley did have the big catch to give the Giants life toward the end of the game, but they were unable to capitalize and forced to kick another field goal.

The Cowboys pass rush haunted Daniel Jones all night to the tune of five sacks. Jones also threw one interception and lost two fumbles, one which was returned by Jourdan Lewis late in the game to create the final margin of victory.

On Monday Night Football, Dak Prescott was 22 of 35 for 257 yards, three touchdowns, and the interception. He also rushed three times for 12 yards. Ezekiel Elliott carried the ball 23 times for 139 yards. Amari Cooper led the Cowboys with 80 receiving yards on four receptions. Jason Witten was a possession machine catching eight passes on nine targets for 58 yards.

On defense, DeMarcus Lawrence led the way with a sack and two tackles for loss, one on a run play to Barkley deep in Cowboys territory. Sean Lee and Jaylon Smith each had 12 total tackles. Newcomer Michael Bennett also had a sack and two tackles for loss as well as a big quarterback hit on Daniel Jones in the first half of the game. Xavier Woods who had the interception also had a forced fumble in what was his most productive game of the season.

Coming up next, the Dallas Cowboys have a huge matchup at home with the Minnesota Vikings Sunday. 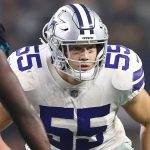 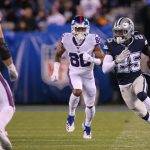