In an unsurprising move, the Dallas Cowboys have placed rookie Guard Connor McGovern on injured reserve as he deals with an ongoing pectoral injury. The open roster spot was used to add Running Back Jordan Chunn from the practice squad, which may be a sign of how contract talks are going with Ezekiel Elliott.

For McGovern, this IR move has been expected for a while. His injury kept him from playing in the preseason and limited his practice time. A setback last week all but assured that he would not be able to help the team during the early part of the regular season.

By keeping Connor on the 53 through final cuts, Dallas preserved the right to activate him from injured reserve after Week 8. He is currently their only player on IR with that eligibility.

Even without their 3rd-Round pick, the Cowboys still have Joe Looney, Xavier Su'a-Filo, Adam Redmond, and Brandon Knight as interior line depth.

The Cowboys are placing rookie offensive lineman Connor McGovern on injured reserve and calling up running back Jordan Chunn from the practice squad to give the Cowboys four runners on the 53-man roster not named Ezekiel Elliott, according to a source. While the addition of…

Calling up Jordan Chunn is an interesting move given the ongoing talks with Ezekiel Elliott. When Dallas only kept Tony Pollard and Alfred Morris as true tailbacks on the initial 53-man roster, it seemed a positive sign that they expected Zeke to back with the team this week to prepare for the season opener.

But with the Cowboys back at practice today and Elliott still holding out, Chunn is now on the roster as RB3. In addition to some solid offensive skills, Jordan was the best special teams player of the young running back prospects.

If Zeke does return in the next day or two, it won't be difficult for Dallas to adjust and send Chunn back to the practice squad. But the Cowboys did not need make this move for practice purposes; it does get you thinking about how they're preparing to play the Giants and what players they expect to have, and not have, for that game.

For now, we continue to watch and wait for resolution between Dallas and its star running back. But as these roster moves show, business must go on.

Is everyone else as sick of the Ezekiel Elliott soap opera as I am? My god just forget about him already, I can already see he has to be the center of attention, and he is the center of attention with this hold out. He won’t say yes or no to the offer Dallas has offered, no instead he just keeps putting in little stipulations to drag this crap out a little bit longer. Just when it looked like the little crybaby was going to sign a new deal, now he has added something new. This is the kind of games you play in high school, not as a professional athlete. Again I say give him the offer and then give him until Fri. to sign it and report to the team or he can stay in Cabo with his new friend Marshall Faulk and watch the Cowboys play on TV. I am done with this whole mess!!

He won’t say yes or no to the offer Dallas has offered, no instead he just keeps putting in little stipulations to drag this crap out a little bit longer.

Isn’t that the same thing as, “saying no?” 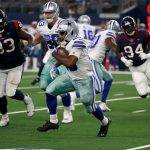 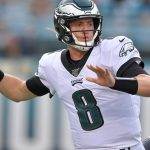