It's hard to believe that we're looking at the Dallas Cowboys potentially clinching the NFC East this week, but that's how dramatic the turnaround has been over the last five games. Week 15 could lock Dallas into the playoffs and give them a lot of freedom over their final two games.

In truth, there's not much intrigue left for the Cowboys in this regular season. One win gives them the NFC East, and it would take the Saints or Rams dropping all three of their remaining games for Dallas to have a shot at a top-two seed.

So, barring the nearly impossible, Dallas is locked into either the 3rd or 4th seed. They will host one of the Wild Card teams in the first round of the playoffs.

The biggest thing to watch now is how the seeding shakes among the bottom four playoff teams. The Seahawks seem a cut above the likes of Minnesota, Carolina, or one of our NFC East friends, so avoiding them in the first round would be lovely.

Here are this week's games involving the NFC playoff contenders:

We've already discussed what the Cowboys need to do, so let's talk about the Colts. Not only do they have home field advantage this week, but they are fighting for their playoff lives.

Indianapolis is one of four teams with a 7-6 record battling for the final Wild Card spot in the AFC playoffs. The Broncos are also in the mix at 6-7, giving none of these teams any cushion for losing.

Dallas has its own incentive to win, though. If they want to avoid Seattle in the first round, they probably need to take the #3 seed from the Chicago Bears. They need to keep winning and hope for the Bears to drop a game or two.

Ultimately, getting into the playoffs and starting at home is a huge reward. But anything that can help make the road a little easier is worth pursuing. It's no time to rest on your laurels.

As we just discussed, we'd like to see Chicago drop a few games to give Dallas a shot at the #3 seed. This week isn't the worst opportunity, with Aaron Rodgers and Green Bay still not completely eliminated from playoff contention.

Expecting much from the Packers here is unwise. They've had a coaching change and appear to be in a state of organizational disarray. But they still have Rodgers, and crazy things always happens in rivalry games.

So while these are two teams seemingly headed in opposite directions, you never know what could happen given the variable elements. By all means, root for the Cheeseheads.

Your rooting interest here comes down to a simple question; who do you prefer to play among that last bunch of Wild Card teams? Who does Dallas match up best against between the Vikings, Panthers, and Eagles?

I think we'd all agree that we don't want to see the Eagles a third time. Beating a team three times in one year is tough to do, and especially given how close last week's meeting was.

The Panthers beat Dallas in the season opener, but that was in Carolina and well before the Cowboys were playing at a high level. A second meeting could go very differently, especially with the recent slumping by the Panthers.

Both Carolina and Minnesota are struggling, with one on a five-game losing streak and the latter having lost their last two. The Vikings just fired their offensive coordinator, so neither of these teams appear to be going into the postseason with any real momentum.

At this point, I'd say it's a toss-up between the Panthers and Vikings. Both are much preferable to seeing the Eagles again, so I would just keep rooting for both to win. In either case, they knock out Philadelphia.

We'll reassess the threat level of Carolina and Minnesota as playoff opponents in a few weeks.

I didn't mention the Redskins among those last three teams because they may not win another game this year. Their QB situation is so bad that even the Jaguars look good by comparison.

Granted, Jacksonville is lousy right now. Washington might be able to go down there and get a win, but neither team has anything to play for now. This one may come down to whether or not the Jaguars have gone into tank mode.

Seattle just walloped the Niners 43-16 a couple of weeks ago, and changing venues is unlikely to make that much difference. The Seahawks are a legit NFC contender and San Francisco is already thinking about the offseason. A Seattle loss would be great, but it ain't happening this week.

While catching the Rams and getting a top-two seed would be great, it's barely plausible. The far more concrete benefit here is seeing the Eagles lose and getting them further away from a possible Wild Card spot.

In fact, an Eagles' loss this week would give Dallas the NFC East even if the Cowboys fall in  Indianapolis. That's not the way we want to win the division, but you take what you can get.

With the breaking news that Carson Wentz is unlikely to play this week with a back injury, you'd generally think this suits the Cowboys' interests. But Super Bowl MVP Nick Foles is still the backup in Philadelphia, so is anything really for certain?

We have every reason to root for Carolina here. For one, it helps the Panthers stay ahead of the Eagles in the Wild Card race. Also, it brings the Saints one loss closer to possibly being caught by Dallas. A Saints win doesn't really benefit us all. 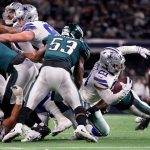 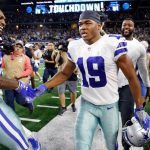