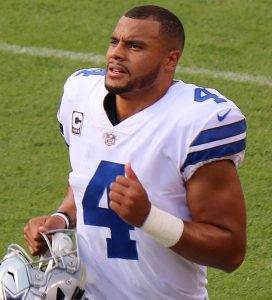 Money talks, and no one talks louder than the Dallas Cowboys. It’s hard to find a more affordable Pro Bowl player than Dak Prescott. A former fourth-round pick from Mississippi State, Prescott is only scheduled to make around $680,000 in 2018. It’s only his third year, but it may be his most important when it comes to his future with the Cowboys.

When a team drafts its franchise quarterback, they usually only get about two seasons to prove they’re “the guy.”

Every year, teams draft someone, usually in the first round, with hopes that he’ll be their sought after franchise quarterback. However, by being drafted so high, there’s little margin for error afforded to them.

In Dak Prescott’s case, being drafted outside the first round, he wasn’t expected to contribute near as much in his first two seasons as he has. A day-one starter for the then injured Tony Romo gave him his opportunity and he has made the most of it.

In two seasons, Dak Prescott has a 22-10 record, made the playoffs and Pro Bowl, completed 65.2% of his passes and has added a new dimension in the Cowboys offense thanks to his mobility in and out of the pocket. However, I wouldn’t be the first to tell you that his year two wasn’t as good as his year one was. Prescott lost four more games, completed fewer passes and more interceptions in year two.

To be fair, some of his issues attributed to the injury of Tyron Smith, Ezekiel Elliott’s suspension and many of his receivers dropping more passes than we’ve previously seen. These issues will have to be cleaned up not only for the team, but for Dak Prescott’s future.

According to Spotrac.com, Dak Prescott’s market value today is around $25 million a year, which would make him among the most paid players in the league. In comparison, Kirk Cousins will be paid the most in the league at $28 million this year, while Aaron Rodgers will make $22 million.

So, the Cowboys quarterback’s market value is among the best in the league.

Cowboys fans everywhere are rooting for him to succeed but year three will be crucial. If he can improve on his play from a year ago and keep winning games, he would likely see his extension happen sometime around his fourth season.

People have already seen Prescott at his highs and lows. Going into 2018 with a new receiving core, the return of Ezekiel Elliott and a new left guard will get rid of any excuses.

If Dak Prescott really is who he believes he is, and who fans know he can be, then the Cowboys have their quarterback. If not, then the search will continue.

Prescott should be plenty motivated to be the Cowboys quarterback for the present and the future. Also, he should be motivated by how much money he could get it.