Running for 105 yards on 19 carries, Elliott looked to have his old burst and power back during the Cowboys win over Philadelphia. Maybe it was the week off due to injury, or maybe it was extra motivation following Tony Pollard's monster performance.

Either way, it was welcomed by Mike McCarthy and company.

This week, Elliott has a chance to do something only Tony Dorsett and Emmitt Smith have ever done in a Cowboys uniform: rush for 1,000 yards in four of his first five seasons. And, what's crazy, is that without his 2017 suspension he'd probably be looking for his fifth 1,000 yard campaign.

Elliott needs just 63 yards rushing on Sunday to break the notable 1,000 yard mark, but he made sure to point out what the ultimate goal for this Sunday really is.

“I mean, getting 1,000 yards in this league, it's not easy. It's definitely not easy. And it is an accomplishment, but it's not really something I'm focused on” – Ezekiel Elliott.

Elliott went on to say that his focus is on beating the Giants and hopefully clinching a division title, not reaching his 1,000 yard milestone. Of course, this is the right thing to say, but breaking that 1,000 yard threshold would certainly be an accomplishment during what has been a down season for him as a whole.

Zeke has been the target for most of the criticism aimed towards this offense since Dak Prescott's injury, struggling with fumbles and looking sluggish behind a beat up offensive line.

Even if he reaches the 1,000 yard mark, 2020 will have easily been Elliott's worst season yet. Sure the health of his quarterback and offensive line have a lot to do with that, but that's kind of the point.

The Cowboys can win the NFC East at 7-9 with a victory over the Giants, and an Eagles win over Washington. It's not going to be easy to get the help they need, but the odds are that Elliott's milestone and a Cowboys victory will likely go hand in hand.

We should be able to get the win if we keep playing the way we have been. Now the eagles have to help DC4LIFE

I think ole EE is starting to grow up a little bit! I still think he can play but I’m not sold that he is worth the cabbage that he is getting paid but if Jerry is dumb enough to pay it then I guess you can’t blame EE! Just hope he can start playing at a high level again! 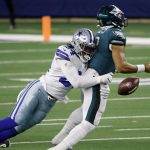 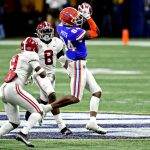