The Dallas Cowboys were engaged in a very eventful and sometimes nauseating holdout with All-Pro Running Back Ezekiel Elliott this summer. After all the speculation and jabs through the media, the two sides finally agreed on a six-year 90 million dollar extension with 50 million in guarantees just prior to the season opener. With his financial future secured it was time for Elliott to get whatever fieldwork he could before playing the New York Giants. With limited practice time, Elliott had a slow start to the season with a 53-yard performance on 13 carries. However, after watching the Cowboys win against the Redskins it’s clear that he’s slowly but surely getting back to form.

Elliott came into Sunday’s game averaging just under 89 yards per game on the road against the Redskins, including one of his best career rushing performances in 2017 with 150 yards. His 484 yards and 6 touchdowns against Washington prior to Sunday’s game were both career highs for Elliott versus a single opponent.

This wouldn’t be your typical Elliott game of consistent ten-yard runs and leaping over would-be defenders. Instead, it was a steady dose of Elliott as his workload from week one increased from 14 touches to 25. By halftime, he had 48 yards on 11 carries as the Cowboys held a 14-7 lead. 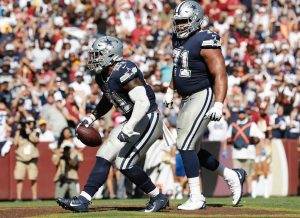 The Cowboys held a 24-14 lead late in the second half until Elliott capped off a ten-play 54-yard drive that put them up 17, and the game essentially out of reach. In the second half, he had just 36 yards on 11 carries until a 27-yard run late in the fourth quarter gave him 111 yards on 23 carries for the game. Now, Elliott averages 94.3 yards a game on the road for his career against the Redskins, and an amazing 99.2 yards overall.

Going into week three Elliott has almost 40 real game carries under his belt. What this means is now he’s gotten the necessary reps and taken the necessary hits needed to get him in football shape, which is something he couldn’t fully simulate working out in Cabo. Even with a reduced role in the season opener Elliott is currently on a 1,300-yard 16 touchdown pace as we speak. Those are the kind of numbers that get you the NFL’s highest paycheck for running backs, an honor Elliott took over recently, and rightfully so.

Elliott himself can feel things coming back to form with a couple of games out of the way. He spoke about where he was postgame after this past Sunday’s win over the Redskins.

The Cowboys are off to a 2-0 start for the first time since 2015, and more importantly, they have their All-Pro running back in football shape and fully confident coming off a 100-yard performance. Next up is the Miami Dolphins at home who have a defense that has given up 102 points and 391 yards rushing in the first two weeks. Another opportunity for Elliott to get his legs under him even more and produce at a high level as the Cowboys look for their first 3-0 start since 2008.