In 2019, the Dallas Cowboys finished with the top-ranked offense in the NFL, thanks in large part to the passing game. Quarterback Dak Prescott had the best season of his career with 4,902 yards (2nd in the NFL) and 30 touchdowns (4th in the NFL). Said numbers were made possible by the stellar play of the Cowboys receiving core, who all saw career high’s in certain categories as well.

Pro Bowl Wide Receiver Amari Cooper dealt with his fair share of injuries but did manage to not miss any games. He set career high’s in receiving yards (1,189), touchdowns (8), and yards per catch (15.1). In 25 games with the Cowboys since being acquired via trade from the Oakland Raiders, Cooper has registered 132 receptions for 1,914 yards and 14 touchdowns, connecting with Prescott at a 67.7 percent rate.

Cooper is currently seeking a long-term deal with the Cowboys. Talks have stalled some, however, he will be the organization’s top priority after Prescott’s inevitable new deal. If he’s not signed, I foresee the franchise tag being used on him. No matter what, you can’t let 19 out of the building.

Michael Gallup took the next step in his progression as one of the NFL’s brightest young receivers. His 66 receptions for 1,107 yards and six touchdowns doubled his numbers in those categories from his rookie season in 2018. Getting 1,000 yards from your second option is a huge plus for any offense. I believe Gallup has a good chance to make his first Pro Bowl in 2020. 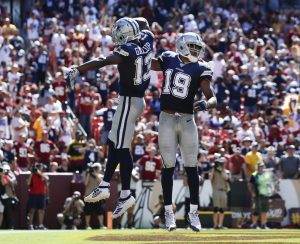 Then there’s nine-year veteran Randall Cobb. A very low-cost and productive addition to the Cowboys offense, he racked up 55 receptions for 828 yards and three touchdowns, including a career-high 15.1 yards per catch in 2019. These numbers could have been a lot higher if it weren’t several penalties erasing big plays/touchdowns for Cobb. So when you think about it, you’re talking about a receiver in his ninth season that could’ve challenged for 1,000 yards as a third option. Call me crazy, but I want that on my team, especially when I know I can get him for cheap. Plus, the added motivation to keep him on board steems from his eight-year relationship with new Cowboys Head Coach Mike McCarthy during their days with the Green Bay Packers.

Cobb still being able to produce in the slot makes it hard to double-team Cooper or Gallup on the outside, which was evident by both getting over the 1,000-yard plateau in 2019. If I’m the organization I would re-sign Cobb to a two-year deal in heartbeat. Seeing what he did as a third option in year nine and knowing the cost wouldn’t in any way damage the near 100 million in cap space projected for 2020 Cobb can easily fit into the team’s future plans, but we shall see.

The Cowboys, I would presume, will go either defensive line or defensive back with the 17th overall pick in April at the NFL Draft. Having said that, I think on day two they should take a look at adding another young weapon for Prescott at receiver. If you’re going to pay him in the neighborhood of 35-40 million annually, then you provide him with as many weapons as possible. Arizona State’s Brandon Aiyuk, TCU’s Jalen Reagor, USC’s Michael Pittman Jr, Baylor’s Denzel Mims, and Minnesota’s Tyler Johnson are names to keep an eye on.

Re-signing Cobb and getting another weapon on the outside through the draft would take the Cowboys passing game to the next level. What this would do is give them the luxury of moving Cooper and Gallup around with Cobb’s ability to also play outside. Simultaneously, it would make it harder for number one corners to key in on Cooper if you can constantly move him around, creating opportunities for mismatches with lesser corners.

It’s just a hunch, but it’s one I feel could work, and work quickly.