The Dallas Cowboys season came to an end far earlier than they expected against the San Francisco 49ers nearly a month ago in the playoffs. Predictably, free agency rumblings began immediately after, but also, mock drafts for the Cowboys started to be a hot topic as they possess the 24th pick. 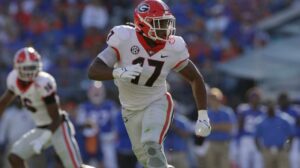 “The Cowboys' scouting department has gone with the best available prospect in the first round of each of the past two drafts (wide receiver CeeDee Lamb in 2020, linebacker Micah Parsons in 2021), avoiding reaches to improve positions of strength. They could do that again with Dean, who could replace free-agent-to-be Leighton Vander Esch. Although Dean is a little undersized — 6 foot, 225 pounds — his play speed, smarts, leadership ability and physicality match every trait of the modern-day off-ball linebacker. Adding Dean would allow Parsons to remain on the edge full time as a versatile defender.”

The Cowboys taking Dean would make a lot of sense when looking at the current status of their linebacker group. Dallas didn't pick up the fifth-year option on Leighton Vander Esch. Also, Keanu Neal is set to hit free agency and Jabril Cox, who the Cowboys took in the fourth round in 2021, is rehabbing a torn ACL.

Dean was a monster this season for the Bulldogs racking up 72 tackles (10.5 tackles for loss), six sacks, two interceptions, two force fumbles, and five passes defended as the leader of Georgia's top-ranked defense that spearheaded their run to the National Championship and won him the Butkus Award.

This selection would give the Cowboys another stud linebacker with top-flight athleticism to go with Micah Parsons who took the NFL by storm in 2021 by registering 13 sacks and being named a First-Team All-Pro. Dean would be an instant starter and allow Parsons to put his hand in the dirt more and rush the passer. 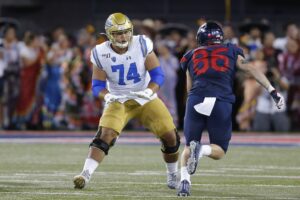 “With center Tyler Biadasz still inconsistent and Connor Williams potentially leaving in free agency, the Cowboys could look to find reinforcements for the interior of their offensive line. Rhyan played left tackle for the Bruins, but he has the skill set and strength to kick inside and become an instant impact contributor.”

Dallas needs help on the offensive line on the interior and at tackle. As Reid noted, Rhyan has the versatility to slide inside as a possible replacement for Williams or he could be groomed as the heir apparent to Left Tackle Tyron Smith who has had injury issues for the last half-decade.

Rhyan was a three-year starter for the Bruins and only allowed one sack in 2021 (661 pass-blocking snaps) and just two for his career. He has really good athleticism at 6'5 and 320 pounds and plays with great strength and balance.

This player would be fine if he’s as good as a pro as he was as a collegiate. Personally, I’m hoping Tyler Linderbaum is available at #24 because from what I’ve seen and read, he should be a perennial All-Pro as a Center. And that would be a HUGE upgrade for our OL, improving not only our pass pro but also our run blocking.