Following a Thanksgiving loss to the Las Vegas Raiders, a frustrated Trysten Hill threw a punch at LVR's John Simpson. On Tuesday, it was announced the Cowboys DT would be suspended two games for this. While many Cowboys fans were quick to point out the NFL's disparity in not suspending players for similar actions, including NYG's Kadarius Toney throwing this punch in a game at the Cowboys, there's no defending the position Hill leaves Dallas' defensive line in for Thursday against the Saints.

Fortunately, this will be the only game Hill will miss, as the league announced his appeal reduced the suspension to one game. The Cowboys will not have Hill as they welcome back DeMarcus Lawrence this week. Instead, he'll have to earn his playing time back the following week against Washington – when Randy Gregory and Neville Gallimore could both return as well.

Source: NFL-NFLPA appeals officer Derrick Brooks has reduced the suspension of #Cowboys DT Trysten Hill from two games to one.

Hill and Gallimore competed for snaps at the 3T position last season when Hill was available. The Cowboys could have a use for both players moving forward, as they also learned Tuesday that DT Brent Urban is officially out for the season. Urban's absence has left a void at the run-stopping tackle position, one the Cowboys can hope to fill with a rotation of Hill, Gallimore, Carlos Watkins, and rookie Osa Odighizuwa.

Hill was disruptive against the Raiders, playing a season-high 39 snaps. His development has been slow, but the Cowboys new scheme under Dan Quinn suits Hill's strengths as a one-gap pass rusher well. The strength of the entire Cowboys defense will be their ability to get after the QB once Gregory and Gallimore can rejoin Lawrence, Odighizuwa, and Micah Parsons.

After a short one game suspension, Trysten Hill hopes to remain a big part of this strength should the Cowboys coaching staff trust the third-year DT to remain disciplined on the field.

It shows that the NFL once again is caught with it’s pants down, the suspension should never have been 2 games in the first place because a precedence was already set by them not suspending Sadarius Toney for the same infraction. They suspended Hill due to their ongoing unfair treatment of the Dallas Cowboys.

The bottom line is that ole Roger has hates Jerry Jones and the boys! Any time that he can stick it to Jerry he will instruct his cronies to do so! 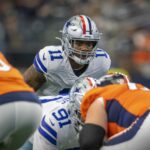