Dak Prescott has been everything the Dallas Cowboys could ask for in a franchise quarterback since he took over for Tony Romo. Prescott has won two division titles, an Offensive Rookie of the Year award, and been one of the most productive players at the most important position in football.

After the Cowboys missed the playoffs in 2019 despite a career year Prescott with 4,902 yards and 30 touchdowns, the former fourth-round pick began dealing with some serious off-the-field hardships. Once the coronavirus pandemic hit at the beginning of last year, Prescott began to deal with anxiety during quarantine. Also, last April, Prescott got the heart-wrenching news that his older brother Jace had committed suicide.

Having to deal with these things sent Prescott down an unfamiliar and challenging road as he explained in an interview with Graham Bensinger.

“All throughout this quarantine and this off-season, I started experiencing emotions I’ve never felt before,” Prescott said. “Anxiety for the main one. And then, honestly, a couple of days before my brother passed, I would say I started experiencing depression. And to the point of, I didn’t want to work out anymore. I didn’t know necessarily what I was going through, to say the least, and hadn’t been sleeping at all.”

That's a lot for anyone to deal with. Nonetheless, Prescott kept pushing as his fifth season in the NFL approached, and much like the season before, his long-term financial security was the main topic of discussion in the city of Dallas and around the NFL landscape.

After being franchise tagged and not receiving a lucrative extension by July, Prescott continued to express his desire to be with the Cowboys for the long haul.

“I grew up wanting to be a Dallas Cowboy and I am, and I've got dreams of being a Dallas Cowboy until I'm done throwing the football,” Prescott said last August. “None of that's going to change just because we couldn't reach an agreement there for this season. But as I said, I'm a Cowboy right now and that's all that matters and that's my whole focus.”

Prescott used that focus to come out guns blazing to begin last season. Although the Cowboys were struggling at 1-3, Prescott led the league in passing with 1,690 yards and became the first quarterback in NFL history to pass for 450 yards or more for three consecutive games. Unfortunately though, in Week 5 against the New York Giants, Prescott suffered a compound fracture and dislocation of his right ankle which ended his 2020 campaign.

In a six-month timeframe, Prescott lost his brother, battled anxiety and depression, didn't get his long-term deal and suffered a season-ending injury. However, much like he's always done, Prescott kept chugging along with a positive outlook and took to Instagram to thank the fans for their support after successful surgery on his ankle.

Prescott didn't let his setback keep him from motivating others either. When speaking at NFL.com's Pepsi Rookie Roundtable, he offered some advice for players going through their first year in the league as he spoke about his rehab.

“Don't take anything that you're doing for granted,” Prescott said, via the team's website. “No matter how big or how small it is, don't take it for granted because it's a blessing. I've been able to play every level of my career because the guy in front of me has gotten injured, so I know what it means to be ready and to stay ready in case a guy gets injured in front of you.

“But now to be that guy that's injured for the first time in my career missing the rest of the season, it's different. It's tough. But for me, it's about making and creating small victories. So each and every day when I wake up and I go in for rehab, it's about, for me, seeing my leg or seeing my body do something that it didn't do the day before or creating a feeling that I didn't have before so I know that I'm continuing to get better.”

As the Cowboys were making a push to win the poorest NFC East in December, Prescott made an appearance at practice and was even seen walking without the support of crutches for a split second. His main man and best friend on the team, Ezekiel Elliott, talked about how Prescott's attitude remained upbeat although he was dealing with such a gruesome injury.

“It’s good every day to see him,” Elliott said. “He’s always in great spirits, doing whatever he can to uplift his team, although that’s very limited just because of the circumstances. Dak’s been great.”

The Cowboys' 2020 season ended against the Giants in Week 17 and the rumblings of whether or not Prescott would be signed long-term began as the third round of negotiations between his representatives and the Cowboys got underway.

Team Owner Jerry Jones has a history of being a master negotiator. However, back in January in an appearance on 105.3 The Fan, Jones acknowledged that Prescott had tons of leverage as he attempted to lock up his financial future.

“I don’t know how you could have any more leverage,” Jones said “His evolving into an NFL quarterback has been nothing short of a perfect picture. He has great ability, in my mind, to win games. He’s talented. He certainly has the experiences and he has all the things, which has been substantiated by what we’ve offered Dak. You wouldn’t offer Dak what we offered in the past if you’d not thought he was very special. The issue is, how do you come together? And that’s no stranger to me. I’ve been doing it all my life, putting things together. We’ve got to get it together.”

It had been debated relentlessly over the last year or so about what Prescott was seeking in a contract extension, that was until NFL Network's Jane Slater joined the Dan Patrick Show last week. She revealed that Prescott was looking for a deal “right behind” Kansas City Chiefs Quarterback Patrick Mahomes whose average salary is $45 million per season which would make him the second-highest paid player in the NFL, edging out Deshaun Watson of the Houston Texans.

As the March 9 franchise-tag deadline drew closer, many believed Prescott would be tagged for the second consecutive season and give the Cowboys until July 15 to work out something long-term, that was until Monday. After nearly two years of negotiations, the Cowboys locked up Prescott on a four-year, $160 million dollar deal with $126 million in guaranteed money.

The deal has an average of $42 million in the first three years, a $66 million signing bonus (most in NFL history), and $75 million in year one according to ESPN's Adam Schefter.

The only thing left was to make it official. On Wednesday, as he sat between Jerry Jones and Executive Vice President Stephen Jones, Prescott basked in the glory of finally inking his deal.

“I grew up a Dallas Cowboys fan, never in a million years did I imagine not being a Cowboy once I put on this uniform and I put on this star,” Prescott said. “There was never a slight doubt in my mind that I wouldn’t wear the star for the rest of my life and as Charlotte Jones told me a couple of days ago, when you sign that line you’re a Cowboy forever and you can’t get out and I’m excited for that…this is just the beginning.” 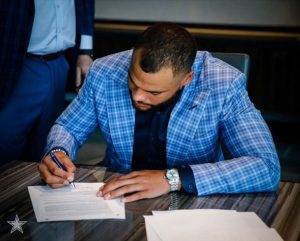 Prescott hadn't spoken to the media since his injury, and reporters asked about where he was health-wise currently.

“I thought about jogging out here and jumping on the stage but I don’t know if y’all are ready for that but I’m healthy,” Prescott said. “I thank you for the support, I thank Cowboys Nation, everyone out there who was praying for me, sending their condolences, that’s a feeling that I’ll never be able to put in words to be in that hospital bed not really knowing what’s going to happen.”

The newly signed quarterback offered some encouraging words for kids that admire him as well.

“To all young kids out there, whatever it is that you want to do…it’s out there for you, the decision has been made, take the road less traveled,” Prescott said. “Roger Staubach’s saying is ‘take the extra mile and see how lonely it is’… believe in yourself, have faith, and don’t stop till you’re there.”

Now that the Cowboys have their franchise quarterback for the foreseeable future the focus now is getting a sixth Lombardi trophy to Dallas, and Prescott is right on board with that thinking when talking about how his season ended prematurely.

The most touching moment since Prescott got his new deal was a photo that was shared by his eldest brother Tad via Twitter. It showed the brothers hugging after Prescott got the news, and he provided some insight as to what that moment meant for himself and his brother. 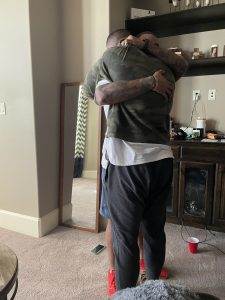 The contract saga is over and now Prescott can resume his career with a clear head knowing that his financial future is set. The first goal will be winning the NFC East and getting the Cowboys back to the playoffs for the first time since 2018.

Matthew Lenixhttps://mlenixsctx.wordpress.com/
I write dope stuff about the Dallas Cowboys and what not.
Previous article
Whatever the Amount, Vander Esch’s 5th-Year Option is Too Expensive
Next article
2021 NFL Draft: Top 5 CB Rankings for the Dallas Cowboys

It’s great to see Dak coming back from what he went through last year , i can’t imagine what it’d feel like losing my brother , nor would I wish that kind of injury on even ppl I hate ,

hope he bounces back 100% and I don’t just want that cuz I’m a fan , but as someone who wants to see the guy succeed

I’ve been a avid anti pay Dak guy as I don’t think he’ll ever live up to what he’s being paid , but I do hope I’m wrong , I hope Dak can go out there and prove everyone wrong and win a SB , and prove he is worthy to be amongst the cream of the crop QBs in league

Well said x88! I really like Dak but I just have a problem with paying these guys the kind on money that they are getting in any sport just to play a game ! But I also realize that’s just the way it is! So with that said let’s go Dak and go win us a few SB’s! One thing I like about ole Dak is that with all the protest he kept standing for the National Anthem and didn’t back down even when others were calling him an Uncle Tom and other names ! He is a man that stands on what he believes and he really don’t care what others think! !