The Dallas Cowboys had a disappointing 2019 season in a lot of ways that led to their 8-8 record. They struggled to stop the run, Leighton Vander Esch missed almost half the season, injuries on the offensive line, a lack creatively on first down you name it. However, their two most important players on offense, Dak Prescott and Ezekiel Elliott, were excellent once again. The former threw for nearly 5,000 yards, while the latter had the second-most total touchdowns in a season in his career.

Even with that being said, both players have plenty of motivation heading into the 2020 season when factoring in what’s transpired recently. 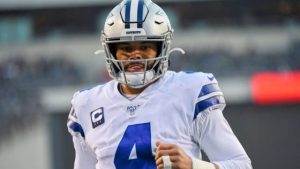 Prescott came out on fire last season as he set an opening game franchise-record with 405 yards passing vs the New York Giants. Owner Jerry Jones was so impressed with his performance that he proclaimed a new deal with Prescott was “imminent“, but it never materialized. Instead, he bet on himself and it completely paid off. He finished second in the NFL in passing yards (4,902) and fourth in touchdown passes (30) while leading the league’s top-ranked offense.

Having more than proved his worth, it was only a matter of time before Prescott would get signed long-term right? He certainly thought so as he expressed during Super Bowl week in Miami earlier this year.

“You would hope and you would think something is going to get done, right?’’ Prescott said, according to the Dallas Morning News.

In February, Executive Vice President Stephen Jones said that talks between the organization and Prescott were “fixing to heat up” before the July 15 deadline. Just prior to the start of free agency in March, the Cowboys placed the exclusive franchise tag on Prescott, eliminating any chance he could be signed by another team.

The Cowboys made an offer to Prescott during the NFL Scouting Combine that would pay him $35 million annually with around $106 million guaranteed over a five-year span. Prescott and his representation have been adamant about only wanting a four-year deal so that he can come to the negotiating table again when the cap explodes due to the new television revenue. Prescott would sign his franchise tender in June.

Neither side budged and the contractual stare down lasted all the way up to the final hours before the deadline when a last ditched effort was made to close the deal, but no dice.

Now, Prescott is in a position where he has to bet on himself again. He’s watched two other quarterbacks, Jared Goff and Carson Wentz, who he’s outperformed since they all entered the league in 2016, get signed to long-term deals with years left on their rookie contracts while he played out his entire rookie deal without receiving an extension. He has the most firepower he’s ever had with the addition of CeeDee Lamb to the receiving core to go along with Amari Cooper and Michael Gallup. Throw in Elliott, Tony Pollard, and Blake Jarwin and you’ve got an extremely dangerous offensive attack.

Prescott recently said “I’m a Cowboy and couldn’t be happier” when he spoke with USA TODAY Sports. He has everything around him that he needs plus added motivation from not getting a deal done to light it up again and finally secure his long-term financial future in 2021. 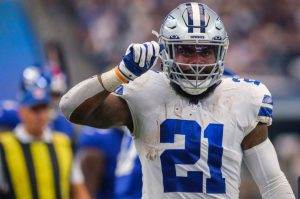 Elliott came into last year’s offseason having won two rushing titles (2016, 2018) in his first three seasons and leading the league in yards per game (2017) the only season he didn’t. Last summer, he held out and missed virtually all of training camp in hopes of landing a lucrative extension. His patience paid off and he signed a six-year, $90 million dollar extension less than a week before the season kicked off.

Without training camp, Elliott obviously would have to play himself into game shape. In the midst of doing so, he would get off to an amazing start. Elliott ran for over 100 yards five times in the Cowboys first eight games. The next five games were a struggle for Elliott and the team in general. They went 1-4 and Elliott didn’t reach 100 yards in any of those games. He would finish strong with two 100-yard performances in the final three games.

Recently, ESPN did a series ranking the top 10 players at 11 different positions. Elliott was ranked as the third-best running back behind Saquon Barkley and Christian McCaffrey. However, one anonymous coach didn’t see things quite the same, ranking Elliott the 11th-best running back in the league.

“Very few breakout runs, doesn’t look as strong anymore. Feels like he’s about 60 to 70 percent of what he was.”

Elliott himself scoffed at the take. “Whoever this is, is faded lol.”

About a week later, Elliott took to Twitter to voice his displeasure with the criticism his play took in 2019, despite his numbers clearly being elite.

Check the stats. Since I entered this league I have dominated year in, year out. Put some RESPECT on my name.

Almost 1800 scrimmage yards and 14 TD’s with no training camp and now im not the same back.

Elliott definitely has a point when you do your research. Since entering the league, Elliott leads all backs in touches (1,169), rushing yards (5,405), and scrimmage yards (7,024). He ranks second only to Todd Gurley in rushing touchdowns (40) and total touchdowns (48) over that span as well.

Prescott claims the duo’s best ball is yet to come as they enter their fifth season in the NFL. One thing is for certain, they’ll be heavily motivated to show once again how talented they are in 2020.