Dak Prescott looked to be ready to play before the Dallas Cowboys Week 8 matchup with the Minnesota Vikings after suffering a calf injury. Airing on the side of caution, he was held out and the Cowboys were able to grind out a 20 to 16 win. Heading into last week's game against the Denver Broncos, the expectations were that Prescott would pick up where he left off, but that didn't happen.

Prescott had his worst performance of the season against the Broncos. His 19 completions and 232 yards were his second-lowest in each category for the season. Also, he completed a season-low 48.7% of his passes. Prescott's timing looked to be off and it appeared he was pressing a bit. With a game under his belt since his injury, he should bounce back against the Atlanta Falcons.

The main focus for Prescott this week was his footwork, something he thought was off when he went back and viewed the film from his performance against Denver.

“I think my footwork was poor in that game, and I think it may have come from the lack of it over the past few weeks,” Prescott said about not practicing for a few weeks. “This week it was important to get back to doing all my basic drills, pushing it, being smart about it, obviously, not putting too much on myself, but making sure that I've got the reps and I get every rep in the game plan, whether it's moving off the spot and just making sure I get back to the basics of what I believe in with my footwork.”

It's the little things that separate pretty good quarterbacks from the NFL's best at the position, which Prescott has elevated to in the last few seasons. Fine-tuning this aspect will get Prescott back to performing at the level he's accustomed to playing at. Another thing that will assist Prescott is getting back Wide Receiver Michael Gallup who is making his return from his calf injury that he suffered in the season opener. He's the Cowboys' primary deep threat, and with him on the field, Amari Cooper and CeeDee Lamb will get more one-on-one opportunities, and Tight End Dalton Schultz can work the seams making the Cowboys passing attack very difficult to defend.

The Falcons defense isn't very good ranking 17th in yards and 28th in points allowed. Prescott has more than enough weapons to get the Cowboys' top-ranked offense back to producing at a high level after a season's worst 16 points and 290 yards last week. 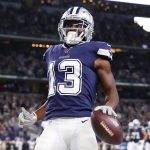 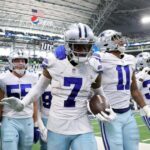