America is the land of opportunity, and on Sunday afternoon, the Cowboys will have plenty of it. They play the Carolina Panthers and will feature one of the more intriguing teams that Dallas has put out in recent years.

The team features as deep of a defensive line as the team has had in a long time, the linebacker group has shown very positive improvement from preseason, and Dak Prescott has plenty of new weapons to throw to, including a healthy, non-suspended Ezekiel Elliott. The sky’s the limit for this team.

Their first test of the season is today against the Carolina Panthers, who are coming off an 11-5 season in which they made the playoffs. They bring back play makers like Cam Newton, Christian McCaffrey, Greg Olsen, and rookie newcomers DJ Moore and Ian Thomas to their offense.

In the past few months, certain circumstances have actually given the Cowboys favor and have opened routes to success. On paper, these teams are very similar but the Cowboys have the edge in some areas that they need to take advantage of. 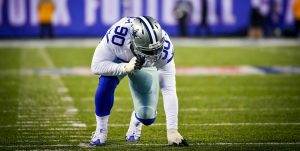 The Panthers offensive front took a hit this offseason when All-Pro Guard Andrew Norwell joined the Jacksonville Jaguars in free agency. At first, the Panthers had arguably the best guard combo in the league with Norwell and Trai Turner, but now there is a huge hole at left guard, perfect for players like Tyrone Crawford and Maliek Collins to take it advantage of.

To make things worse for Carolina, both starting tackles will not play against the Cowboys. Left tackle Ryan Kalil is on injured reserve, and All-Pro right Tackle Daryl Williams is likely not going to play on Sunday.

The Cowboys feature a very deep, very talented defensive line. As deep and as talented as many Cowboys fans have seen in a long time. They are going up against a wounded Panthers and all of them have the chance to land hits on Cam Newton and the entire Carolina backfield. 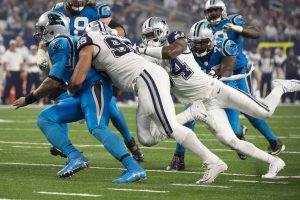 Ideally, every team can start the season with a 100% healthy team, no strings attached. However, injuries and outside forces can affect a team’s roster on opening day.

Three other key players also won’t suit up. Two likely won’t (Curtis Samuel and Daryl Williams) because of injuries, and star LB Thomas Davis has been suspended the first four games of the season. The Panthers will be down some key players and the Cowboys have the skills available to take advantage.

For the majority of the 2017 season, the Cowboys were wondering when Ezekiel Elliott would face his six game suspension. It became a bigger story than the success the team was actually having.

Now that he and the Cowboys are no longer worried about that, they can simply focus on Elliott returning, unhinged and ready to roll.

It will be a test versus Carolina and their 3rd ranked rush defense from a year ago. However, the Cowboys offensive line and star running back have faced similar challenges and, at the very least, won’t have to deal with outside forces.

Instead, the team can ‘Feed Zeke’ because he is hungry.