After a three-game losing streak, the Dallas Cowboys have bounced back with two consecutive wins against the Philadelphia Eagles and New York Giants. They currently sit at 5-3 and hold the top spot in the NFC East.

This Sunday night the Cowboys host the 6-3 Minnesota Vikings who come into this game with the NFL’s eighth-ranked defense. Also, they have the leagues leading rusher in Dalvin Cook and the eighth leading receiver in Stefon Diggs. Both sides of the ball will be tested in this game as the push for the playoffs starts to heat up in the second half of the season. Here are three key players to watch as the Cowboys look for their second three game-winning streak of 2019. 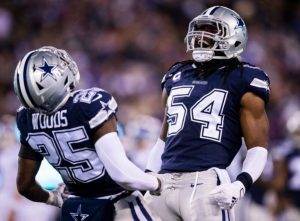 Jaylon Smith has quietly had a really good year after taking the league by storm last season. With 68 tackles, 2.5 sacks, two passes defended, and two forced fumbles Smith is on pace for the best season of his young career. After his worst performance of the season against the New York Jets where he only produced four tackles, Smith has rebounded with 19 total tackles vs the Eagles and Giants in the last two games.

He’ll be needed more than ever this week with the aforementioned NFL rushing leader coming to town. It will be vital for Smith to not allow Cook to get past the second level of the defense with his speed and quickness. If that were to happen it would put Kirk Cousins in position to be effective in the play-action passing game, which is exactly what you don’t want. Neutralizing Cook as much as possible will be priority number one for Smith in this game. 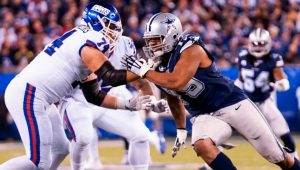 Michael Bennett didn’t waste any time making the Cowboys front office look like geniuses for acquiring him for a seventh-round pick from the New England Patriots just before the trade deadline. In his Cowboys debut vs the Giants this past Monday, Bennett caused havoc from both the interior as well as the perimeter. He finished with three tackles, four quarterback pressures, four quarterback hits, and a sack in 42 snaps.

Bennett’s versatility along the defensive front gives Defensive Coordinator Kris Richard the ability to throw a bunch of different combinations out there and keep guys fresh going up against such a strong rushing attack. Also, he’ll be relied upon to keep constant pressure on Cousins who has a plethora of weapons to throw to with Diggs, Tight End Kyle Rudolph, and even Cook coming out of the backfield. If Bennett can repeat or come close to his performance from Monday night the Cowboys defense will be in good shape. 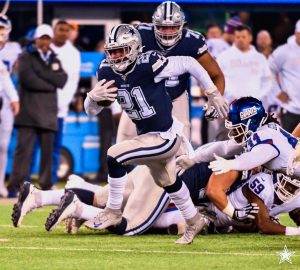 Ezekiel Elliott is looking like the two-time rushing champion that we’ve grown accustomed to in the last several games. When he runs well the Cowboys win, it’s that simple. Elliott has three consecutive 100-yard games (118.3 yards per game) and five total for the season, the Cowboys are 4-1 in those games.

This will be a situation of strength vs strength as the Vikings eighth-ranked run defense will battle the Cowboys fourth-ranked rushing attack. If the Cowboys offensive line can win in the trenches and allow Elliott to eat up yardage they can control the clock and keep Cook and the Vikings offense on the sidelines, which is their philosophy every week. Look for Offensive Coordinator Kellen Moore to try to establish a tone with Elliott early in this game.

The Cowboys lead the Eagles by a half-game in the NFC East. With their rivals on their bye week, it will be important to keep the momentum going from the last two games and stay atop the division. A win Sunday would put them up a full game, and with the tiebreaker in their favor, it would essentially be a two-game lead. Jaylon Smith, Michael Bennett, and Ezekiel Elliott having huge games will be key to the Cowboys improving to 6-3.