At this point in the 2021 draft process, there seems to be four primary schools of thought nationally for the Dallas Cowboys' first round pick.

One, they take Penn State linebacker Micah Parsons. This…well this isn't my favorite. We can leave it at that for now.

Two, they shock the world and draft a quarterback, maybe like Alabama's Mac Jones. Once again, not the biggest fan. They are better off just signing the quarterback they already have in Dak Prescott.

Three, maybe they take an offensive lineman. After all we saw how depleted they were upfront last year, and Tyron Smith can be penciled in to miss at least three games almost every season.

The fourth and most popular move, however, is to take the top cornerback in the draft class. Either Alabama's Patrick Surtain Jr. or Virginia Tech's Caleb Farley.

ESPN's Mel Kiper Jr. went with Patrick Surtain Jr. for the Cowboys in his latest mock draft, and if things fall like Kiper sees them, Dallas will have their pick of every defensive player in the class tenth overall.

I was down to offensive line or cornerback for Dallas, and with Chidobe Awuzie and Jourdan Lewis likely to leave in free agency, I see corner as the bigger need. The Cowboys were terrible on defense last season, and new coordinator Dan Quinn has a ways to go to turn it around. Surtain on one side with former Alabama teammate Trevon Diggs on the other is a great way to start. The Dak Prescott decision looms large on the Cowboys’ offseason, but I expect him to get franchise tagged or sign a long-term deal” – Mel Kiper.

It's far from shocking to see the Cowboys mocked to take a cornerback here. And, honestly, it feels like the best possible move at this point. Dallas' current cornerback depth chart is a wasteland, and depending on free agency decisions it might not get much better ahead of draft day.

They desperately need a defensive play maker that fans can get fired up about, and that one can play alongside now second year cornerback Trevon Diggs for the foreseeable future.

Pairing Diggs with his former Alabama teammate in Surtain would give the Cowboys are a really fun foundation in their secondary.

But, if does come down to Farley and Surtain, Cowboys fans will be arguing over the pick for the next decade.

I bet Diggs is pushing for Surtain at 10 , wouldn’t be mad at Surtain being picked , he’s got less injury concerns than Farley

I’d think long and hard about whether or not I trade down some and get Horn or Barmore ,

Horn could very well be best CB in draft ,

I worry about a Morris Claiborne 2.0.

Another of the three would be good either Surtain, Farley or Horn. Cowboys have many holes to trade and as long as they can get one of the three trading down makes some sense but there is always a risk of missing out on any of the three if trading down. After these 3 guys there is big drop off in talent at cornerback which is the Cowboys most deficient position.
Their pass defense was pathetic.
For that matter so was the run defense and linebacker should be next priority.

Anyone interested in keeping Dak healthy this yr? Draft left OT. THEN go all Defense. Better a tackle who plays 8-10 yrs than a CB playing 5 yrs and gone coz Football Jerry won’t pay him on second contract no matter how good he is. 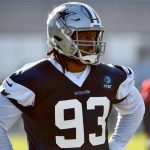 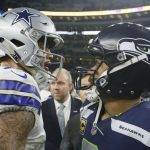