The Dallas Cowboys have some really difficult decisions ahead when it comes to the makeup of their 53-man roster. This is as talented and as deep of a team as I've seen in a long-long time. So talented and so deep that it has many people thinking they could contend for that ever-elusive sixth Lombardi Trophy in 2019.

With the third preseason game coming this Saturday and then the fourth and final preseason game only a week away, the Dallas Cowboys will likely have a lot of their decisions made before next Thursday. Figuring out who they'll try to keep on their 10-man practice squad may be just as difficult a decision as who they keep on the 53-man roster.

In short, every player that the Dallas Cowboys drafted or signed as an undrafted free agent — such as Daniel Wise — in 2018 or 2019 is eligible to be on the 2019 practice squad. Certain players with two accrued seasons are eligible for the practice squad.

Though Devin Smith was active for 10 games his rookie season with the New York Jets, he's still practice squad eligible. He was only active for four games in 2016 and then sat out 2017 and 2018 due to injury.

Jameil Showers, after spending 2016-2018 on the Dallas Cowboys practice squad, is no longer eligible to be retained.

Taryn Christion has already started getting some reps in place of Mike White and with how poor White's preseason has been, the Dallas Cowboys might opt to keep Christion who could serve as a scout team quarterback when the Cowboys face dual-threat quarterbacks.

Jon'Vea Johnson had been the star of training camp until the Dallas Cowboys' scrimmage and started playing games. He's a good route runner but struggled to catch the ball with any consistency.

Jake Campos gets the nod over Mitch Hyatt who has struggled in training camp. I doubt the Dallas Cowboys would keep three tackles on their practice squad.

Like Campos, Brandon Knight gets the spot on the practice squad. Though he struggled with injuries in training camp, Knight had been playing well and even saw some reps at guard. His ability to flex inside is invaluable for a team that loves position flexibility.

The Dallas Cowboys defensive line depth is pretty incredible and it's going to be difficult for them to keep that to a manageable level. Daniel Wise was a priority UDFA they may have to risk on waivers to get to the practice squad because there will be some difficult decisions at other positions.

The Dallas Cowboys seventh-round draft pick, Jalen Jelks, gets caught up in the defensive line number crunch like Wise.

The team loves his length and speed, but Westry is still a very raw player at the position. Some seasoning on the practice squad would give them time to see if Westry is more than just his height.

The Cowboys like to carry a running back on the practice squad and this year that could be Jordan Chunn. Because of the wear and tear the running back position suffers, they wouldn't want to use one of their rostered running backs to be the scout team runner. Chunn has some versatility as a runner and a receiver and offers nice size.

Rico Gathers is gone and in comes Cody McElroy, who like Gather is a raw prospect, but played football much more recently. He's flashed some in the preseason games, and with the Cowboys likely only carrying three tight ends on the roster, they may feel inclined to keep one on the practice squad.

The battle along the defensive line for the final defensive line spot likely comes down to Kerry Hyder, Daniel Wise, Christian Covington, and Ricky Walker. Walker has had some nice moments in the preseason and could force one of Hyder or Covington off of the roster, but if not, he'll end up on the practice squad if he makes it through waivers.

Though this spot could easily go to Jalen Guyton, Walker's flashed a bit more in the preseason games than Guyton has. Walker could make a case for Christian Covington's spot on the 53-man roster with another strong preseason game or two, but it's likely that his best shot to stick with the Dallas Cowboys is the practice squad.

Based on what's happened this preseason, this is how I think it will go. I'm sure I left out your pet cat, and I'm sure you'll let me know about it. Cut down day is only 10 days away and once the roster trim happens, we'll know rather quickly who is going to make the Dallas Cowboys practice squad to start the 2019 season.

If we're talking practice squad, that means football is right around the corner, and not a moment too soon. 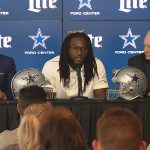 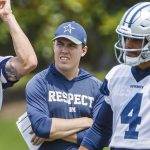