The Pro Football Hall of Fame is considered one of the most illustrious honors that can be bestowed on a player during their career. There have been numerous players down the years that have played for the Dallas Cowboys before getting their induction into the Hall of Fame. In total, there are 22 former Cowboys who are now in the Hall of Fame.

The Dallas team at present could do with a Hall of Famer or two to improve their chances of reaching the Super Bowl, as they are considered the outsiders with Betoclock. But, which former Dallas players can we find in the Hall of Fame?

There aren’t many players that are more respected than Larry Allen, and he enjoyed eleven excellent years with the Cowboys. He joined the franchise in 1994 and stayed until the end of the 2005 season. During his time with the Cowboys, he made eleven Pro Bowl appearances and was a seven-time first-team All-Pro between 1995 and 2001.

His performances on the pitch saw him named in the 1990s and 2000s teams of the decade, as well as the 100th Anniversary NFL team. His more successful season with the Cowboys culminated in Dallas winning their most recent Super Bowl. Allen was an integral part of the team that won the championship in 1995, and his esteemed success was rewarded with a Hall of Fame induction in 2013.

Tony Dorsett spent ten years with the Dallas Cowboys, and the success that he achieved meant that the franchise’s pick in the first round of the 1977 NFL Draft remains one of the most successful.

He immediately seemed like a player that was going to fit in with the Cowboys, and his performances immediately gained the attention of those watching. He was awarded the NFL Offensive Rookie of the Year award in his first season before he went on to play in four Pro Bowls. The first of those came in 1978, which was just his second full season in the NFL. He would make the first-team All-Pro in 1981.

His most successful season with the Cowboys came to an end at Super Bowl XII, where he was an important part of the Cowboys team that beat the Denver Broncos 27-10 in New Orleans. Dorsett scored the opening touchdown in that win. He would later go on and play for the Broncos before injury cut his career short.

Nicknamed “Captain Comeback,” one of the most successful periods in franchise history wouldn’t have been possible without Roger Staubach. The quarterback led the Cowboys to five Super Bowls during the eleven years that he spent with the franchise, and was a true one-team man.

It’s a field not a pitch. This isn’t merry old England

Three of the best Cowboys of all time.

Larry was one of the strongest man to play in the NFL. A real road grader. Said to have benched 705 lbs. 11 time Pro Bowler. At 6′ 3″ 325, he also had speed to run down defenders. Super Bowl winner. One of the best O-lineman in NFL history.

Tony was one of the two best Cowboy RBs, Emmitt being the other. 12,739 rushing yards. Speed and vision were his two best assets. Had a 99 yards TD run. Super Bowl winner.

Roger, a Heisman Trophy winner at Navy, was a 27 year old rookie, having served 4 years in the Navy prior. In his 11 year NFL career with DC, played in five Super bowls, started 4, winning 2. Six time Pro Bowl winner. Considered one the best QBs in NFL history. May not have the flashiest stats, but knew how to lead and WIN. One of the best, if not the best, Cowboys of all time. 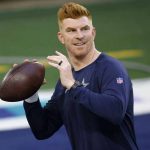 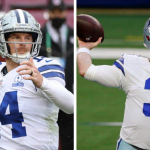