It all starts in the trenches in the game of football. Quarterbacks, running backs, and receivers get most of the headlines, but the line of scrimmage is still the most important area of this sport. Pro-Bowl Defensive End DeMarcus Lawrence has the responsibility of being that anchor who controls said area for the Dallas Cowboys.

Lawrence is excellent at making plays behind the line of scrimmage. Over the last two seasons, he has managed 29 tackles for loss. Meaning, you can expect one of these types of plays about once a game on average. The goal of a defense is the keep the offense behind the chains as much as possible. It allows Defensive Coordinator Rod Marinelli the freedom to be creative in the calls he makes, seeing as the offense is in a longer down and distance.

Getting pressure on the quarterback, as we all know, is the quickest way to disrupt an offense. Lawrence has registered 49 quarterback hits since 2017. Consistently putting a body on or around a quarterback throws off timing and rhythm. With his 25 sacks over the last two seasons, Lawrence keeping up this amount of pressure will only improve the Cowboys pass defense, which finished a respectable 13th last season. The addition of Robert Quinn should help with this as well with attention having to be brought to his side, and possibly freeing up Lawrence occasionally.

The more dominant Lawrence is from the perimeter, the easier he makes life for the interior of the Cowboys defensive line. Chipping or double teaming him allows a lot of one-on-one opportunities for guys like Antwaun Woods, Maliek Collins, Trysten Hill, Tyrone Crawford, Daniel Ross, and Christian Covington. Having a defense that can get pressure from multiple areas will get you to the winners circle more times than not.

DeMarcus Lawrence's elite level play doesn't just effect his fellow defensive linemen. The linebackers benefit from this as well in a few ways. With a disruptive defensive line, it makes it harder for offensive linemen to reach the second level and block linebackers. Also, it allows them to fill gaps against the run a lot easier. With a core of Jaylon Smith, Leighton Vander Esch, and Sean Lee behind him, Lawrence has the potential to open up the field for the best trio of linebackers league-wide to make plays freely and often.

Lastly, the secondary ultimately gets added by a productive Lawrence as well. The shorter a quarterbacks decision time is in the pocket, the more liable he is to make mistakes. Receivers have less time to get to their spots when running routes when their quarterback is under duress. Even with good corners, they can only cover for so long, eventually, guys get open. The best friend of a secondary is a defensive line that can regularly get to the passer. The Cowboys have stockpiled a nice roster of talent on the back end with Xavier Woods, Chidobe Awuzie, Bryon Jones and Anthony Brown. Also, rookies Michael Jackson and Donovan Wilson. Their skills can be made easier to see with Lawrence continuing his high level of play.

It's pretty clear to see the effect DeMarcus Lawrence has on the entire Cowboys defense. The more elite he plays, the same will go for a plethora of others around him on all three levels. This unit finished 7th overall in 2018, and it will reach that level or higher in 2019 with another big year from number 90. 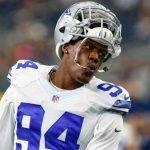 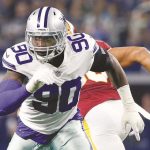