The next time we take a look at these mock drafts to see who various members of the media have landing with the Cowboys, it will be on the week of the NFL Scouting Combine. This 2018 Draft process is charging towards Dallas, and with it we have some new prospects to add to the radar this week.

After introducing you to two secondary players last week, along with a consensus top-10 player in Georgia's Roquan Smith, here is the latest crop of college talent to be mocked to America's Team. 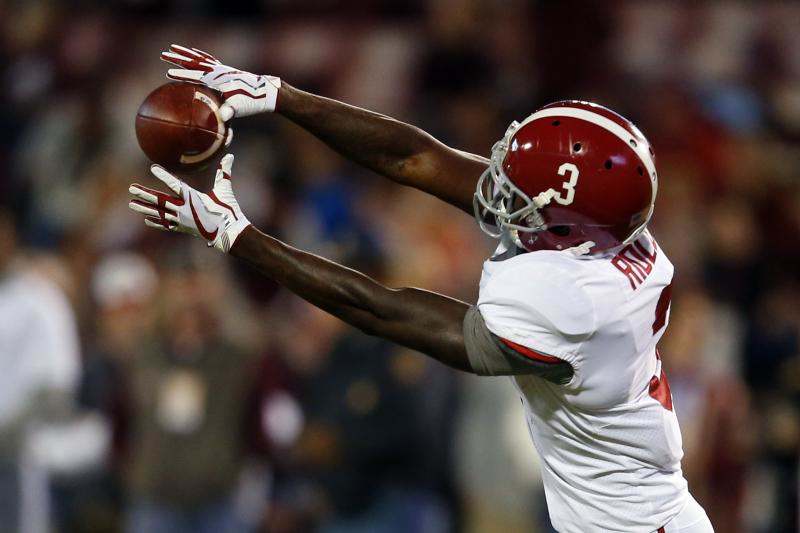 This mock draft comes to us from Chris Trapasso, with the most complete receiver in the draft falling to the Cowboys.

“The Cowboys are thrilled with Ridley still being available. While he's not the biggest wideout and has a skinny frame, he's a dynamic route runner and has the deep speed Dallas has to inject into its offense.”

Calvin Ridley may be the one WR in this draft too good for me to pass up on in the first round. As I've studied deeper into this class, the amount of talent available in the later rounds looks much more attractive for a Cowboys team that remains set on at least two starting receivers.

Should this WR depth deter the first 18 teams in the draft order from taking Alabama's Calvin Ridley though, this is a trigger that has to be pulled in Dallas.

Josh Norris' mock draft produces a familiar outcome for the Cowboys, but the talent he passes up on to mock Hurst to this team is certainly interesting.

“I know Vita Vea is on the board, but in Hurst the team is getting more of an upfield, disruptive lineman. He has special moments off the snap, creating instant penetration and totally destroying the offense’s plan.”

Yawn. It feels inevitable that at least one mock draft each week will have the Cowboys doubling up on Michigan defensive linemen in the first round – upgrading the 3T position with Hurst. While I'm not dismissing Hurst's talent in any way, I don't see a consistent enough player (nor enough of a difference maker) to warrant the 19th overall pick.

Should the Cowboys lose RFA David Irving, there is no doubt they'll be in need of a disruptive defensive tackle. As the roster stands now though, the Cowboys' bigger need is at the 1T position – which Norris ignores despite the best player at that position (Vea) being available.

“Tremaine Edmunds has been a tricky player to slot in this mock draft. He has limitless upside, but at a position (off-the-ball linebacker) that few teams prioritize in the first round anymore. He should be a Bobby Wagner/Luke Keuchly-caliber contributor by 2019, but whoever drafts him will experience some growing pains as the not-yet-20-year-old Edmunds learns not to get sucked into play action or get caught flat-footed in coverage.”

An argument could be made for Tremaine Edmunds as the best LB in this draft. At the very least, he is in elite company atop the board with Roquan Smith. Both prospects play the WILL position, which Tanier correctly points out as one that is devalued currently.

This shouldn't stop Smith from having his name called early in the 2018 Draft, and I have my doubts about it doing the same for Edmunds. A freak athlete out of Virginia Tech, Edmunds will be just 19 years old at the time of April's draft.

This bodes exceptionally well for the Cowboys, who are of course preparing to start Sean Lee at WILL once again. Drafting Edmunds may go against this team's philosophy of drafting immediate starters, along with first round linebackers.

With all that said, Tremaine Edmunds is not a player I could pass up on with the 19th overall pick.

The NFL Scouting Combine will give teams and draft analysts a much better evaluation of where all of these prospects truly belong. Through three weeks of doing this series, I can't say that any player mocked to the Cowboys has been a reach.

Instead, the likes of Smith, Edmunds, and Ridley could soon disappear entirely from the majority of Cowboys mock drafts moving forward. The bigger picture of who actually will be available to Dallas, and who they're targeting in the first round, is slowly coming into focus.

I have been playing the mock drafts from different databases and Tremaine Edmunds, Vita Vea, Maurice Hurst, along with Orlando Brown seem to be the top 4 to pick from @19. So who would you take and why? I usually take Vita Vea because I see him being an immediate impact. I changed it up the last time. I took Orlando Brown OT @19 and James Daniels C/G @50. The reason I went offense in the first 2 picks was because this draft seems deeper in DT then OT or OG. Just curious on your perspective before the combine and free agency.

A lot of good names here, out of that first group I would take Vea at 19. Think they might prefer Edmunds. I wouldn’t double up on linemen in the first two rounds, but Daniels is a great name to keep in mind. 19th overall is a bit high for Brown.

Agree. Hope Vita is there because that makes the selection easier.

Seems improbable they select Hurst at @19, because they already have a three technique tackle in Maliek Collins. What they don´t have is a reliable LG (Cooper plays fine IF Tyron is next to him) and while choosing an OG at @19, they are helping Dak. For me Isaiah Wynn must be that call, because I highly doubt Vita Vea would be at @19.