Do the Cowboys Have Enough Depth at Offensive Tackle?

The Cowboys have dealt with some major challenges at offensive tackle the last two years. After seeing their depth several tested since 2020, do they have enough now as they prepare for the upcoming season?

Tyron Smith missed six games in 2021 and only played in two games the year before. La'el Collins missed five games last year and all of 2020. These absences from the starters left Dallas in a seemingly constant scramble at its offensive line.

At least now the Cowboys know Collins won't be playing for them in 2022. La'el was released for cap space last March and is now with the Bengals. His departure was partially facilitated by the rise of Terence Steele from undrafted free agent to coaches' favorite and the new starter at right tackle.

The last two years of turmoil have allowed Steele to start 27 games and play in large portions of others. He's a battle-tested player who's earned enough trust to become Zack Martin's right-hand man.

With Steele moving up the depth chart and veteran Ty Nsekhe not being re-signed, Dallas is counting on recent mid-round draft picks to provide depth at offensive tackle. Last year's 4th-round pick, Josh Ball, and 5th-round rookie Matt Waletzko are the current favorites for the backup jobs in 2022.

Unless a trade or free agent move happens over the next month or so, this will be the first year in a while that the Cowboys haven't brought in a veteran swing tackle. Their current faith in Ball and Waletzko is unusual and hopefully a sign of their true confidence in these young prospects.

Unfortunately, the last two years have given us plenty of reason to expect Tyron Smith to miss time. That means whoever goes into the season as his backup will likely be called on at some point; a dangerous proposition for a team trying to compete for a championship.

The story on Tyron Smith is well-known at this point. When healthy, even after over a decade, he's still one of the best left tackles in the game. But those healthy times are becoming less and less; Smith has missed more games over the last two seasons than he's played.

There was rampant and logical speculation that Tyron might not be with the team in 2022. But with Collins getting dumped on one side of the line Dallas didn't double-down on change, hoping instead that Smith could at least manage one more solid year while other parts were worked on. If this is the veteran's last season then hopefully it's a good one.

Terence Steele has already started enough games that seeing him with the first-team offense doesn't feel that jarring. But there's a big difference between being the official starter from a backup, hopefully giving Steele more confidence and chemistry with his teammates which will be evident in his performance.

We'll talk more about Ball and Waletzko in a moment. As mentioned before, these two are currently vying for the primary backup roles without a veteran swing tackle to worry about. Their progress will be closely monitored throughout camp given the constant fear around Tyron's availability.

“Hard Knocks” legend (more his mother, really) Isaac Alarcón is back for a third year under the NFL's International Player Pathway program. He doesn't count against Dallas' offseason roster limit, making him an extra body for camp and preseason, but Alarcón has legitimate potential with size and versatility as an option both at tackle and guard. It will be interesting to see how he looks now in his third developmental season.

Dallas is bringing back Aviante Collins, a sixth-year veteran who spent 2021 on their practice squad. They also signed Amon Simon out of Texas A&M as an undrafted free agent this year. While we wouldn't project either to make the roster in 2022, Terence Steele is a perfect example of how crazier things have happened. 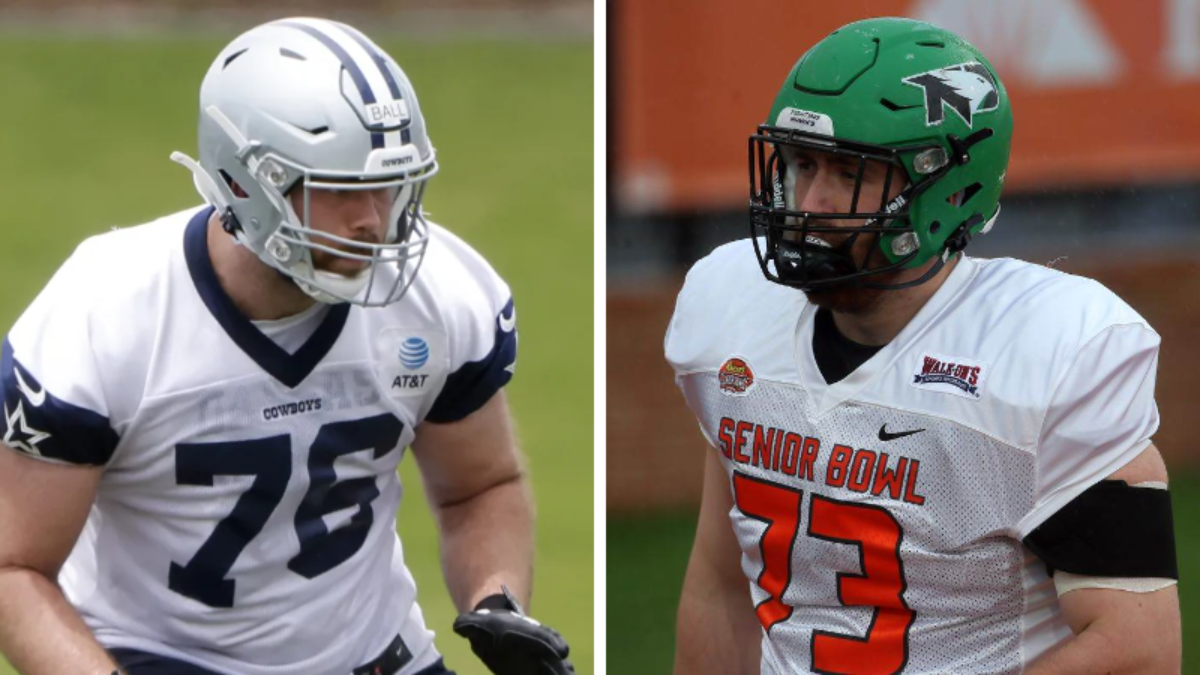 Both of these prospects enter 2022 with similar narratives. Ball was a 4th-round pick in 2021 and Waletzko a 5th-rounder this year; both lauded as great values with upside for where the Cowboys got them.

Ball's fall last year was more explicable; domestic violence accusations led to his leaving Florida State and eventually finishing his college career at Marshall. If not for those character concerns Ball likely would've been a Day 2 draft selection.

Waletzko making it to the 5th round last year was harder to understand given his high athletic potential. But concerns that he plays too tall and lacks strength allowed Dallas to grab him where they did.

Again, the prize of being the “swing tackle” this year may not fall to these guys. Dallas could end up signing a veteran free agent anytime during camp or adding someone around final cuts. It will depend on how well Ball and Waletzko perform in the coming weeks.

Last year we didn't even have a true swing. Ty Nsekhe was the backup at left tackle and Terence Steele was the backup on the right. Some guys are much better playing one side or the other and that has been discussed with these two; Ball being Steele's backup and Waletzko's being Tyron's in 2022.

Another big factor here is 1st-round rookie Tyler Smith. While he'll be the starting left guard in 2022, Tyler is expected to one day replace Tyron at left tackle and might even serve as his backup this season. While Dallas would hate to shift multiple positions around to account for one absence, Connor McGovern or Matt Farniok playing LG while Tyler slides left may give them their five best offensive linemen in an emergency.

Ultimately, how well Ball and Waletzko perform in camp and preseason will have a major impact on all of these decisions. Can one of them show enough versatility to serve in a swing role? Can either of them show enough to keep the Cowboys from pursuing other options before Week One?

Given Tyron Smith's well-documented health issues, the answers to those questions could be paramount to Dallas' success in 2022.

Jess Haynie
Cowboys fan since 1992, blogger since 2011. Bringing you the objectivity of an outside perspective with the passion of a die-hard fan. I love to talk to my readers, so please comment on any article and I'll be sure to respond!
Previous article
BREAKING: CB Kelvin Joseph Is Cleared By Dallas County Police
Next article
Eagles in Talks w/ Former Cowboys RB JaQuan Hardy

They certainly do not have good EXPERIENCED depth at Tackle. Bit of a crap shoot IMO. 1st rounder Tyler Smith better be the real deal, or they will be scrambling a little. They drafted him as a Guard, is he capable of playing LT? Thought he was a reach. Don’t necessarily like these “late risers” and “smaller school” prospects; bottom-line, didn’t like him as a “first round” pick. Ball is ANOTHER “character issue” guy, that Cowboys seem to LOVE, and hasn’t hit the field much. Waletzko is a rookie with “strength” issues. All that said, hoping for the best. Maybe Tyron can avoid injuries this year.

I think Tyron Smith could’ve made it through the whole season last year if it wasn’t for Connor McGovern falling on smith’s ankle!! That was the only reason Smith missed games last season!! He didn’t have any problems with his neck or back like years past, so I think it’s a good possibility that Smith plays all season this season…. As long as somebody don’t land on him and injure him again!!