Drew Pearson finally got the validation he’s waited decades for two weeks ago. The former three-time First-Team All-Pro was selected to the Pro Football Hall of Fame, bringing his football journey to its rightful conclusion.

“The Original 88” as he’s known within the Dallas Cowboys organization and its fan base, made an appearance on The D.A. Show on Friday which is hosted by Damon Amendolara of CBS Sports. Predictably, the subject of Dak Prescott came up as he enters his third round of negotiations with the Cowboys to get a long-term deal done.

The Cowboys legend sent a warning to team owner Jerry Jones that a second franchise tag could be the end of Prescott’s time in Dallas.

“Where do you go if you don’t sign Dak?” Pearson said. “If you let him go, especially if you let him play under the franchise tag this season and you don’t sign him anywhere along the line to a long-term contract, Dak ain’t gonna be here after that. The man has a lot of pride and he sees what’s going on. He wants to be quarterback of the Dallas Cowboys. It is a big deal.”

“Dak ain’t gonna be here after that. The man has a lot of pride.” Newly minted HOFer Drew Pearson says the Cowboys are playing w/ fire if they franchise tag Dak. pic.twitter.com/PepW1XmwPB

When the former fourth-round pick didn’t get a deal done last summer, he was still adamant about wanting to be with the Cowboys for the entirety of his career.

“None of that’s going to change just because we couldn’t reach an agreement there for this season. But as I said, I’m a Cowboy right now and that’s all that matters and that’s my whole focus.”

Prescott earned $31.4 million in 2020 under the franchise tag, however, he suffered a season-ending ankle injury after just five games. A second tag would cost the Cowboys $37.7 million in 2021. The NFL announced this week that the salary cap floor for the upcoming season will be $180 million, which could go up after the final 2020 revenue numbers are known, and any increase will help the Cowboys in their efforts to sign Prescott.

Pearson went on to say that Jones could risk not only losing Prescott with a second tag but it could affect the entire team.

“If he has to play the full season under that franchise tag, Jerry’s really taking a risk in that case…not only with Dak as a quarterback of the Cowboys but within the rest of that football team because Dak has a tremendous influence in that locker room. He is the leader. He sets the pace.”

Prescott has gotten a lot of support from his teammates recently. Rookie sensation CeeDee Lamb said “I cannot wait to have him back” when he sat down with Jori Epstein of USA TODAY Sports a few weeks ago. Also, Tight End Blake Jarwin, who is coming back from a torn ACL, posted a photo on his Instagram account last week asking Prescott “Wanna run it back in a few months?” 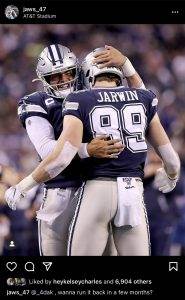 The Cowboys and Prescott haven’t wavered on wanting a long-term marriage. March 9 is the first date to circle because it’s the deadline to place the franchise tag on a particular player, which the Cowboys will do if no deal is reached by then, and will give the two sides until July 15 to negotiate a lucrative extension.

Prescott will be the quarterback for the Cowboys in 2021. His future beyond that, for the moment, is a mystery and will continue to be so until his new deal is finalized.