The Dallas Cowboys are getting back one of its most important defenders. Defensive Tackle Neville Gallimore, who dislocated his elbow in the Cowboys' second preseason game, has been designated to return from injured reserve which starts his 21-day practice window.

Gallimore can be elevated to the active roster at any point during these 21 days, however, he'll be placed back on injured reserve if he isn't. It's unlikely that Gallimore will be ready in time for the Cowboys showdown on Thursday Night Football against the New Orleans Saints this week but his season debut could come against the Washington Football Team in Week 14.

Dallas is getting key starters back on the defensive line. In addition to Gallimore returning to practice for the first time since August, Defensive End DeMarcus Lawrence is on track to make his first appearance since breaking a bone in his foot before the Cowboys' Week 2 matchup with the Los Angeles Chargers against the Saints. Randy Gregory, who has missed the last three games with a calf injury, will likely return against Washington next week, possibly joining Gallimore.

The former third-round pick had his ups and downs during his rookie campaign in 2020 but became a quality starter by midseason. Gallimore finished with 28 tackles (four tackles for loss), a half-sack, and four quarterback hits. His quick first step and freakish speed to pursue down the line of scrimmage at 300 pounds is exactly what the Cowboys' run defense needs after struggling as of late.

America's Team has a two-game lead in the NFC East but needs to start winning after a lackluster November in which they lost three out of their four games. Getting Gallimore back along with Lawrence and Gregory comes right on time for the Cowboys' defense as December kick starts the push towards the playoffs.

Matt, keep the content coming. I think your the most thorough and informed writer on this page. Please keep up the great work. 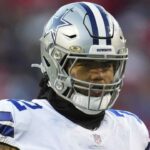