This week's NFC East matchup between the Dallas Cowboys and the Philadelphia Eagles is an important game at the top of the division standings. With both teams sitting at 3-3 and sitting two games back in the win column of four teams in the NFC, makes this game very important for determining who will represent the NFC East. With six teams currently at 4-2 or better, it seems unlikely that the NFC East will send two teams to the playoffs this year unless something dramatically changes for both of these squads.

With this game having playoff implications in week seven, the biggest matchups to watch on both sides of the football will be in the trenches. Both the Dallas Cowboys and Philadelphia Eagles boast All-Pro and Pro Bowl players on both sides of the line. Whichever team is able to win their matchup more consistently will come out the victor in the game.

Both teams are dealing with injuries to their offensive lines. The Dallas Cowboys will be without Left Tackle Tyron Smith and Right Tackle La'el Collins. It's possible that the Philadelphia Eagles could be without their All-Pro Left Tackle Jason Peters for this game. The injuries along the offensive line create opportunities for the opposing defensive line to wreak havoc and disrupt the run and pass game. How each offensive line is able to hold up under pressure from All-Pro and Pro Bowl players like Fletcher Cox and Brandon Graham for the Eagles and DeMarcus Lawrence and Robert Quin for the Cowboys will be the deciding factor in the game.

Per Pro Football Focus has each team graded in the top 13 in the NFL in pass-rush productivity, with the Eagles ranking sixth and the Cowboys 13th. The Eagles and the Cowboys rank in the middle of the league in sacks with 14 each. Both teams are getting around 80% of their sack production from their defenisve line. Where the Cowboys linebackers Jaylon Smith and Leighton Vander Esch are providing pressure from someone other than their front four, it's the Eagles defensive backs who have done the secondary work for Philadelphia. Cornerback Orlando Scandrick has two sacks and Andrew Sendejo has a sack as well.

In Football Outsiders the Philadelphia Eagles defensive line rank first in the NFL in adjusted sack rate, “which gives sacks (plus intentional grounding penalties) per pass attempt adjusted for down, distance, and opponent.” The Dallas Cowboys, though they have had good success rushing the passer aren't seen as favorably by Football Outsiders, as they're 20th in the NFL.

The Philadelphia Eagles defensive line are first in the NFL in Football Outsider's adjusted line yards,  “stuffed percentage” at 31% and have allowed the fewest amount of runs that go for 5-10 yards. Where they've struggled is in short-yardage situations where teams are successful on those types of run 75% of the time.

On the flip side, the Dallas Cowboys defensive line has struggled in the run game and the Philadelphia Eagles have an opportunity to have some success against the Cowboys front seven. They rank 27th in Football Outsiders adjusted line yards, 14th in short-yardage situations, and 21st in “stuffed percentage.” Only 17% of their opponents' runs have been stopped for a loss or no gain.

Per Football Outsiders, the Dallas Cowboys offensive line currently ranks fourth as a run-blocking unit. They have the lowest “stuff percentage,” which is the percentage of runs that get stopped at or behind the line of scrimmage at 11%. The Cowboys are fifth in second-level yards, or runs that gain between five and 10 yards per carry, but rank only 20th in yards gained on runs greater than 10 yards. Pro Football Focus has the Dallas Cowboys at third in the NFL in their run blocking grades.

The Philadelphia Eagles run blocking is ranked first per Pro Football Focus. However, Football Outsiders has the Eagles ranked 16th in adjusted line yards, third in power run blocking, and 14th in stuffed percentage at 18%.

As a pass-blocking unit, the Cowboys are eighth in the NFL per Pro Football Focus. Even though they've been playing Cam Fleming and Brandon Knight at the tackle positions, they've been playing fairly well as a group. Not great, but pretty good. The Cowboys rank second in adjusted sack rate per Football Outsiders. The Eagles rank sixth in the NFL per Pro Football Focus and are ninth in the league per Football Outsiders' adjusted sack rate.

This is going to be a very interesting game in the trenches for both teams. The Cowboys and the Eagles have both been very effective in doing the little things along the offensive and defensive line. The Eagles have been the better defensive line against the run. With the Cowboys struggling against the run in 2019, the Philadelphia Eagles may be able to take advantage and keep the Cowboys defense off-balance throughout the game. It'll be imperative for the Dallas Cowboys to get a better effort from their run defense this week. 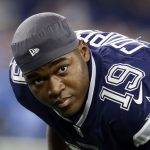 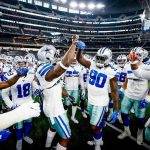