The Washington Redskins announced this morning that they will be retiring the team name and logo in response to rising complaints and public backlash due to its perceived racial insensitivity. That means this brings an end to the 60-year history of “Cowboys vs. Redskins,” one of the greatest rivalries in the NFL and the history of major American sports.

While Washington has been dealing with this debate going back to the early 1990s, the current climate and discussions around race relations in the United States gave this topic new attention. It also caused major financial powers such as Nike and FedEx, who own the naming rights to Washington's stadium, to formally request a change.

The team made the following statement a few hours ago: 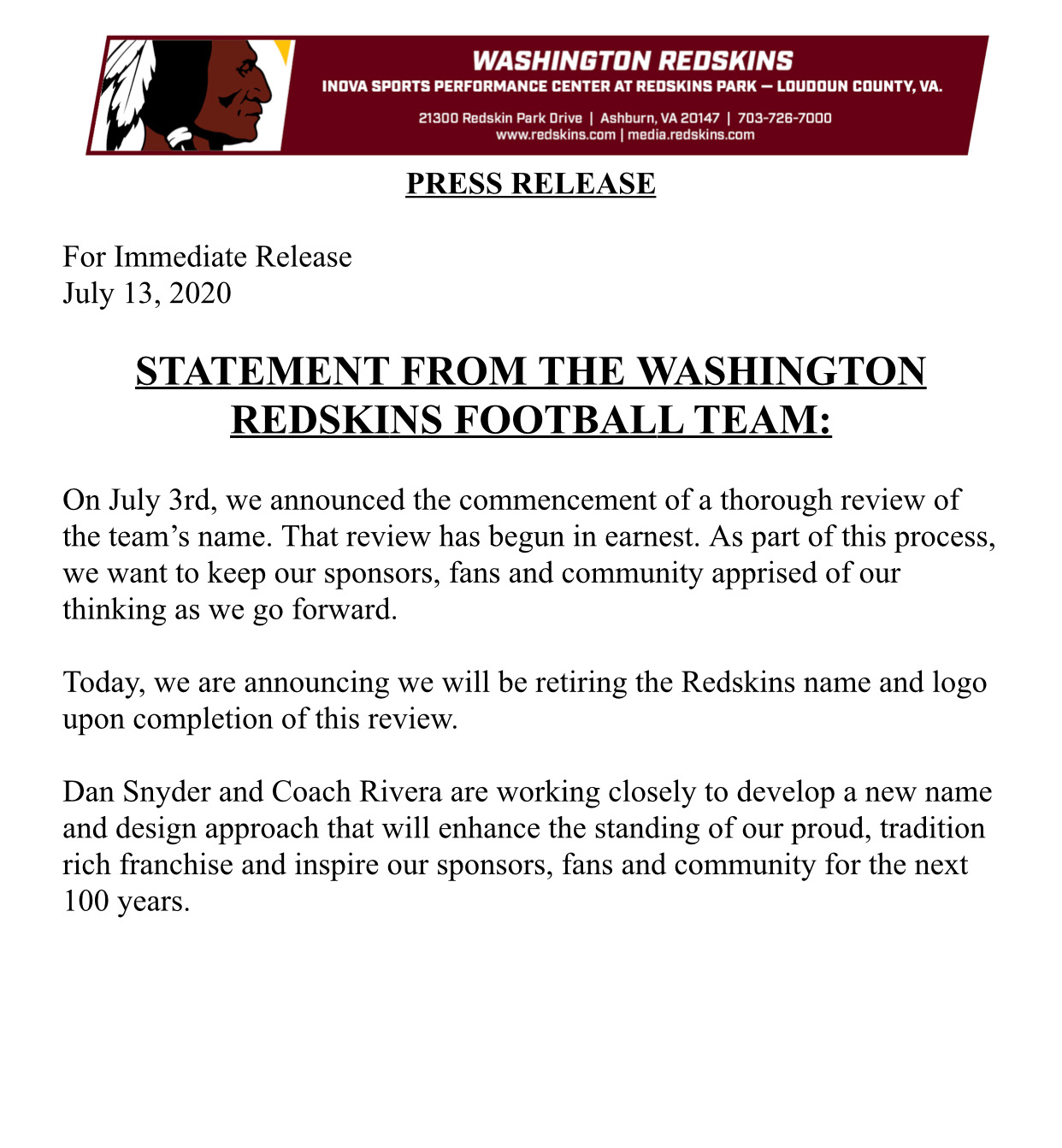 Washington changing its name will be arguably the biggest shakeup in the history of the NFC East. Even the Cardinals leaving the division in 2002, after decades as its resident whipping boys, will likely have been an easier adjustment for the rest of the teams and fanbases.

As for Cowboys fans specifically, especially the younger generations, the perception of Washington as Dallas' greatest rival is a bit antiquated. Their lack of competitiveness during Dan Snyder's time as owner has led to far more heated battles with the Philadelphia Eagles and New York Giants during the modern era.

But that didn't stop Cowboys-Redskins games from often getting a primetime television slot, or perhaps the coveted Thanksgiving Day matchup. Despite the modern mismatch, there was still something special about seeing the blue & white lined up against the burgundy & gold.

The colors may stay the same, but it's now official that the NFL team from Washington D.C. will soon be operating under a new brand.

For the Cowboys' sake, let's just hope they keep getting the same results.

Jess Haynie
Cowboys fan since 1992, blogger since 2011. Bringing you the objectivity of an outside perspective with the passion of a die-hard fan. I love to talk to my readers, so please comment on any article and I'll be sure to respond!
Previous article
Zack Martin Ranked 2nd Best Interior Offensive Lineman By ESPN
Next article
Cowboys Kicker Situation an Underrated Position Battle

When will all this name shaming end. What’s next…no more Cleveland Browns…… Sports and politics are not a good mix. Never has been…never will. Another part of American culture that has been obliterated. Very sad day.

The Cleveland Browns were named after a guy.

Speaking of “racial insensitivity”, where is the backlash on former Redskin and current Eagle DeSean Jackson (and his supporters) for his SEVERAL anti-Semitic messages on Instagram. Since this RI can of worms has been opened, why is there no story here on the Star about this BLATANT racist and anti-Semitic rhetoric by a long time, CURRENT Cowboy foe (like this Redskins story). Interesting how Drew Brees was universally lambasted, even by his team mates for having the stones to support our Flag and the people who defended it. Yet DeSean Jackson is actually DEFENDED by the likes of former NBA player, Stephen Jackson and former Eagle, Malik Jackson with no accountability.

Always remember folks, only WHITE people can be racist.

The Redskins changing their name and logo, for whatever reason, is covered on this site because they’re one our primary rivals. And the reason for that change was merely a brief portion of supporting information; the change is the story. When Dallas and Washington play in 2020, they will have a new brand.

What an individual player on another team does or says about social issues isn’t at all related to the Cowboys. Now if Jackson’s conduct were to get him suspended for our first game with Philly, then yes we’d report it. But just like with the Washington story, we’re reporting on the impact as it relates to the Cowboys.

Respectfully disagree. You, and every other media, bring up the “racial insensitivity” component as a key part of this story. So I don’t see why Jackson, and his blatant racism, should not be brought up also. Jackson plays in the same division, as an Eagle and a former Redskin, and has been a longtime Cowboy rival, same as the Redskins. This Jackson story is relevant, be he is suspended or not.

BTW, one of the other bloggers here, replied to a comment on your story by stating, “The Washington name was racist”. Lets not cherry pick. Can of worms was opened.

As a Cowboy Fan I really hate to see the the Redskins change their name! One reason is under the Redskins name we beat them like a junk yard dog !! So by them changing their name we don’t need to let up ! A couple of suggestions for a new name …… The Pork Skins? Or The Dead Skins? Maybe even The Sheep Skins? I’m sure going to miss The Red Skins!

The whole Cowboys and Indians thing was a component to this rivalry getting launched. Now that both teams have effectively been substandard in championship aspirations for so long, I’m not sure that old rivalry can be revised with the same fervor, which would be a shame. To me, the Redskins have always been our biggest rivalry despite the Giants and Eagles having been more relevant. And as an aside, I always thought the Redskin uniforms were one of the league’s best.

I’ll have to agree with you on that Bill! It’s just not going to be the same on Thanksgiving Day when it suppose to be the Cowboys and Redskins!