The buzz around the Dallas Cowboys lately has been if and when All-Pro Running Back Ezekiel Elliott will get his blockbuster deal. Currently, he hasn’t made an appearance in Oxnard, CA. It has caused mixed emotions from Cowboys fans nationwide. Some feel he should already be at training camp with his teammates and play out his existing deal. Others like myself, realize this is the business side of football and every player has to handle that as he sees fit. Regardless of which side of the coin you’re on the value of Ezekiel Elliott goes deeper than most think.

Time of possession is a very key statistic when it comes to achieving victories on the gridiron. Running the football well allows you to keep the clock moving while simultaneously handicapping the other team’s chances to score. In two of the last three seasons, the Cowboys have finished in the top ten in this category (3rd in 2016, 10th in 2018). Coincidentally, in both those seasons, Elliott lead the league in rushing yards and the Cowboys made the playoffs.

The more you keep the chains moving the less effective a defense will be over the course of sixty minutes. Since his rookie year, Elliott leads the NFL with 220 carries that have produced first downs. This is the NFL’s version of “Keep Away”. The opposing defense can’t ever get settled into their gameplan. However, your offense is allowed to keep their momentum while the opposing team’s offense will struggle to find theirs.

The picture below shows not only the abuse Elliott puts on his body but the extremely high level at which he produces while doing so. What’s even more impressive about these numbers is the fact that he’s done this while missing the equivalent of half a season during his brief three-year career. A six-game suspension in 2017 and missing the season finales in the 2016 and 2018 haven’t stopped him from being the league’s most reliable all-around ball carrier. 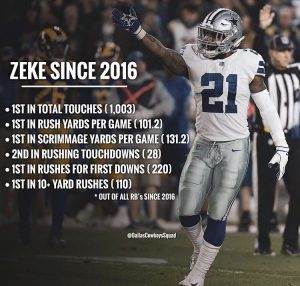 The receiving core definitely benefits from Elliott playing at a high level. With teams committing eight and nine-man fronts to stop him, your receivers job gets a lot easier. Amari Cooper and Michael Gallup will be the Cowboys primary outside receivers. By keeping the defense honest because of the threat of Elliott, these two will get more one-on-one opportunities through the air. This now will free up chances for newly acquired Randall Cobb in the slot. With Cooper and Gallup being effective outside the hashes because of defenses inability to roll coverage to either side consistently, the middle of the field is prime real estate for Cobb. You can throw Jason Witten in there as well with his ability to find open areas in zone coverage.

Dak Prescott may be the biggest beneficiary of Elliott performing at a high level. For one thing, he’s an excellent blocker in the passing game. This is crucial for when games get tight in the third and fourth quarters. Prescott has more game-winning drives than any quarterback since entering the league and having Elliott to keep him upright doing these pivotal moments had been a plus.

As mentioned earlier, nobody gets more first downs than Elliott on the ground. This threat can cause defenses to over-commit to stopping him. Therefore, your receivers can get open more frequently, making Prescott’s job a lot less difficult. Ultimately, this will keep Elliott effective running the football. If Prescott can regularly have open targets due to his running back causing eight and nine-man fronts, defenses can’t key in on a specific aspect of your attack. It basically becomes a pick your poison type of situation. Iron Sharpens Iron, or in this case, Elliott sharpens the Cowboys chances to be good through the air.

Lastly, there’s one more unit that Elliott makes better, and that’s the defense. While he gets first downs and milks the clock on one side of the ball, he keeps his defensive teammates fresh at the same time. Rhythm is very important not only for a quarterback to play at his best but the entire offense. The less of this he and his unit have the greater the chances become for your defense to get stops. The Cowboys finished 5th against the run and 7th in total points and total defense in 2018. You can rest assured this was aided by the amount of time they didn’t have to see the field thanks to Elliott.

No running back touches the ball more than Elliott or has his impact from a totality standpoint. He is presently in negotiations for a long term deal with the Cowboys. The team has made an offer to him, while a counteroffer hasn’t been made, not just yet anyway. Nonetheless, Elliott knows he’s going to be the highest-paid running back in the NFL and so do the Cowboys. Both sides want to and will be this done. But next time the “Trade him” and “He can be replaced” scenarios start to run rampant it might be wise for those individuals to do a little research into the value of Ezekiel Elliott. Also, realize that football is a business and every player has to come to that fork in the road at some point, which he’s at now, and it will get resolved.