The Dallas Cowboys have developed a not so pleasant trend during the early part of the 2019 season, slow starts. In the previous three games before this past Sunday’s matchup with the New York Jets, the Cowboys scored a total of 13 points in the first half. Unfortunately, it was more of the same at Metlife stadium as six points were all the Cowboys could muster before halftime. In the second half, however, Ezekiel Elliott became the focal point as the Cowboys nearly stormed all the way back to tie the game in the final seconds.

The Cowboys found themselves down 21-6 to start the third quarter and were in desperate need of a spark. They would find it in their All-Pro ball carrier as Elliott rushed the ball nine times on a 14 play drive that took over seven minutes off the clock and cut the deficit to 21-9. This drive not only got the Cowboys back to what they do best which is run the football but it created some easy throws for Dak Prescott. 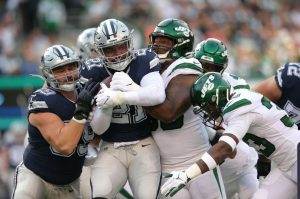 On the next drive Elliott would carry the ball four more times on a 10 play drive that ended on a missed field goal by Kicker Brett Maher. In the fourth quarter, the Cowboys had their most productive drive of the entire game going 84 yards in 11 plays in just under five minutes. Elliott had another four carries and capped off the drive with a touchdown bringing the Cowboys within five at 21-16. The comeback attempt would fall short 24-22 after a failed two-point conversion in the final minute. Elliott finished with 152 all-purpose yards (105 rushing, 47 receiving) and a touchdown.

One of the bad things about the hot start to the season for Prescott was it created an illusion that the Cowboys are now a passing football team. Granted, Prescott has shown improvement throwing the ball down the field but this offense still goes through Elliott first and foremost. He had 18 of his 28 carries in the second half this past Sunday and it was clear to see that the offense moved the chains more fluently with him as the spearhead. This isn’t to take anything away from Prescott or the Cowboys wide receivers by any means but they all benefit from Elliott slowly but surely wearing down defenses which sets up the play-action passing game. This formula has not only won Elliott two rushing titles in the previous three years but it has brought the Cowboys two NFC East crowns over that span, and there’s a good reason for that, it works.

Currently, the Cowboys are searching for answers to solve the puzzle of this three-game losing streak. A showdown with the Philadelphia Eagles awaits them this Sunday at home with outright control of the NFC East on the line. If the Cowboys want to get back on track they need to ride the coattails of Elliott. Prescott has had 40 or more pass attempts in each of the last two games, that’s far too many. Put the ball in Elliott’s hands, control the clock and take advantage of your one-on-one matchups on the outside. That’s the Cowboys recipe for success and they need to get back to it fast.