Ezekiel Elliott has been the NFL's top rusher since he came into the league in 2016. Entering this season, he had more yards, rushing yards per game, and overall touches than any player at his position the last three years. With around 400 touches per season, your body takes a pounding and your time in the league decreases with every snap. In the fourth round of the 2019 NFL Draft, the Dallas Cowboys decided to give Elliott some relief by selecting Running Back Tony Pollard out of Memphis. An elusive dual-threat option with homerun speed to add to the bruising style of Elliott and through the first three games of this season, this combination is starting to show great potential.

Elliott had his usual pedestrian start in the season opener against the Giants with 53 yards on 13 carries. Now, of course, a lot of that is due to the fact that Elliott hasn't played in the preseason since his rookie year and he only had a few practices before the season started because of his contract holdout. After knocking the rust off he was almost back in football shape mentally and physically ahead of a huge road test against the rival Washington Redskins.

After methodically grinding out yards all game his touchdown with just over five minutes left to put the Cowboys up 31-14. When the Redskins scored to make things more interesting Elliott's 27-yard run with under two minutes to go was the final nail in the coffin in a 31-21 victory. Elliott finished with 111 yards on 23 carries.

Going up against the Miami Dolphins Elliott established himself early with 86 on 13 carries in the first half. The Cowboys added two touchdowns in the third quarter that gave them an 18 point lead, allowing Elliott to rest as Pollard closed the door. In total, Elliott ran for 125 yards on 19 carries, with his final rush coming with just under nine minutes to play. The ability to get top-notch production from your bell-cow back and allowing him to rest is a huge luxury for the Cowboys. 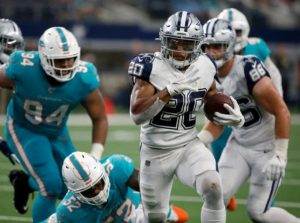 Tony Pollard dazzled fans during the offseason program and training camp with his speed and athleticism. What was yet to be seen was would it translate to the games that mattered. Could he really be a viable option as the backup to Elliott that would give him the kind of in-game rest he needed to be fresh late in ball games?

In th first two games, Pollard had just 46 yards on 17 carries as the Cowboys cruised to two convincing wins. However, this past Sunday Pollard reminded us of the sensation that won over fans the last few months. Through three quarters, Pollard had just 29 yards on 5 carries, but in the fourth, he would put on a show with 8 carries for 74 yards, including capping off the final drive with a 16-yard touchdown run.

Pollard finished with 103 yards as the Cowboys had their first pair of running backs to go over 100 yards in the same game since 1998. This is why the Cowboys drafted Pollard, to have a guy that can lighten the load on Elliott and have him fresh late in tight games. The first three games have gone rather smoothly but at some point, the Cowboys will be in a tight game late and they'll need Elliott to close. The ability of Pollard to take some of responsibility off of Elliott  will pay off down the road.

It's not often that a team can put two running backs on the field with the capabilities of Ezekiel Elliott and Tony Pollard. If these two can continuously be a well-oiled machine it not only helps take the pressure off of Dak Prescott but you keep your own defense fresh by moving the chains. This combination can be a huge reason why the Cowboys take the next step in 2019.