I know it, you know it, everyone who remotely follows the National Football League knows it. The Miami Dolphins football team is tanking. Their objective in 2019 is to lose games. Don't get me wrong, I believe players don't tank. However, front offices do. In the Dolphins' case, they've traded away quality players like Laremy Tunsil, Kiko Alonso and Minkah Fitzpatrick. They've gathered a lot of top draft picks for 2020 and 2021. Right now, they have five first-round draft picks and four second-round picks in the next two years. In 2020 alone, they have seven picks in the first three rounds. That's a ridiculous amount of draft capital.

Many expect them to own the #1 overall pick next April and be in position to draft a franchise quarterback. Someone like Alabama's Tua Tagovailoa or Georgia's Jake Fromm. But will they? You see, I'm not sure that will be the case.

The Dolphins just named Josh Rosen the starter after beginning the season with Ryan Fitzpatrick under center. The truth is, Rosen didn't look bad against the Cowboys last weekend. He's a good quarterback who was drafted in the first round in 2018 and hasn't had a good situation yet. He went from being with the untalented Arizona Cardinals to being with a Dolphins team that many expect to go 0-16. He has potential to be a winning quarterback if someone lets him play around an actual team.

Which brings up the question, if Rosen proves he's worth betting on throughout the rest of the season, do the Dolphins spend their 2020 picks on surrounding him with talent (both on offense and defense) instead of finding his “replacement” after one single season?

I'd certainly think about it. Remember, they have seven picks in the first three rounds of the 2020 NFL Draft. They can literally find 13.2% of a 53-man roster with those picks! And if everything fails, there's always the possibility of drafting Clemson's QB Trevor Lawrence, who might be the most hyped quarterback prospect since Andrew Luck, two years from now.

But then again, if the Dolphins build a team around Rosen in 2020, will they risk not having the first overall pick in 2021 to go after Lawrence? Talk about a tough decision.

As an NFL fan, I hate that the Dolphins are tanking. “Any given Sunday” is not really a true motto for the league if teams do what Miami is doing right now. However, I can't help but be intrigued about what from now on I'll call the “Tanking Dolphins Dilemma.” What would you do?

Player of the Week: RB Alvin Kamara, NO Saints

Alvin Mentian Kamara is a damn good football player. Last week, playing with a backup quarterback in Teddy Bridgewater, he ran the ball 16 times for 69 yards. He also led the team in receiving yards with 92 in nine catches. He had a touchdown in each category.

Honorable Mention: WR Mike Evans, Tampa Bay (He lost, so I couldn't hand the award to him. But he had one hell of a game).

Underdog of the Week: Jacksonville Jaguars

Internet sensation Gardner Minshew II got his first career win in an upset special last Thursday Night Football versus the Tennessee Titans. The then 0-2 Jaguars desperately needed a win to remain in the AFC South conversation. At this moment, you could make an argument for them contending for the division. After all, their defense is top-notch and they have a quality running back. If Minshew plays well enough, this team could win football games. 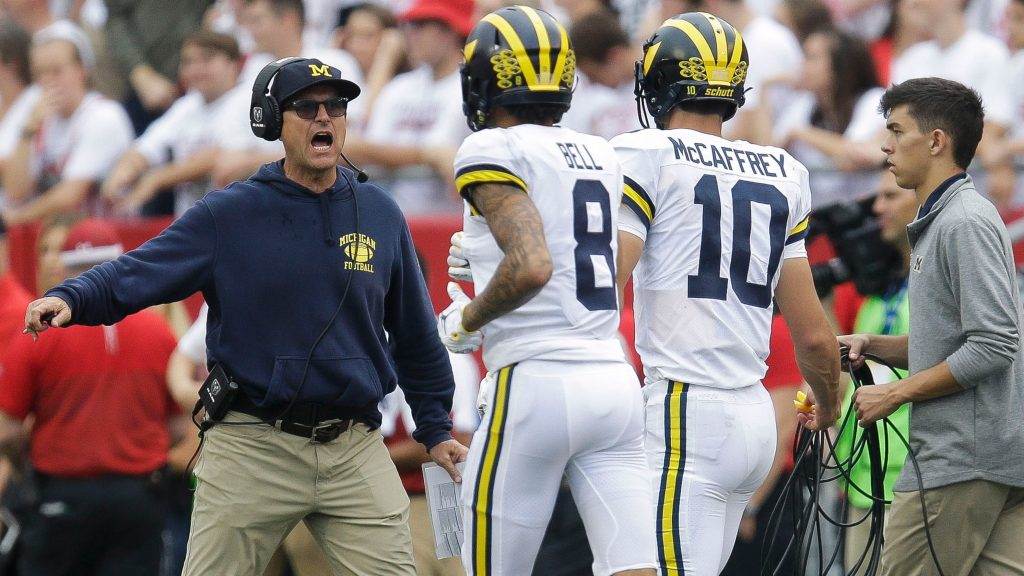 College Football Corner: Jim Harbaugh's Era Should Be Over

I was wrong about the 2019 Michigan Wolverines. I had them as a Top-4 team heading into the season and as the favorites to win the Big Ten over the Ohio State Buckeyes. After struggling versus Middle Tennessee and Army, I wrote in this column about how they were “better than that.” I thought they'd prove it when they played the Wisconsin Badgers last Saturday. They did not. In fact, they looked incompetent. In the first half, they were outscored 28-0. They couldn't stop Heisman candidate RB Jonathan Taylor, who absolutely embarrassed what's supposed to be a top defense in the nation as he racked up 203 yards in 23 carries, averaging 8.8 yards per attempt.

They proved that once again, they can't handle top teams. They might get 10 wins a season, but they are not legit contenders. After defending them all offseason, it's time for me to admit how wrong I was. In the Jim Harbaugh era, this team has been mediocre. And with the talent they have now, this was supposed to be their year. It's time for Michigan to move on from Harbaugh. He's definitely not the answer.

Mauricio Rodriguezhttps://www.facebook.com/PrimeroCowboys/
I love to write, I love football and I love the Dallas Cowboys. I've been rooting for America's team all the way from Mexico ever since I can remember. If you want to talk football, I'm in... You'll find me at @MauNFL.
Previous article
Play Breakdown: The Endless Possibilities From 20 Personnel
Next article
Report: Amari Cooper has MRI on Right Ankle