The Dallas Cowboys took a huge step towards wrapping up the NFC East in week 14, surviving a comeback effort by Washington on the road 27-20. The Cowboys offense couldn't build on a 24-0 halftime lead, as the team relied on the healthiest defense they've fielded all season to close the game out.

The concerns on the Cowboys offense may not be addressed until week 17, with a lot riding on the Cowboys hosting the NFC's top-seeded Arizona Cardinals. Their remaining schedule around the Cardinals is all divisional opponents the Cowboys have handled easily, and with control of first place they may have opportunity to rest starters like Ezekiel Elliott and Tyron Smith.

Smith's ankle injury suffered on Sunday has already ruled him out for this week against the Giants.

In a game Washington had to have at home, here's how the Cowboys were able to escape with a road win and 9-4 record. 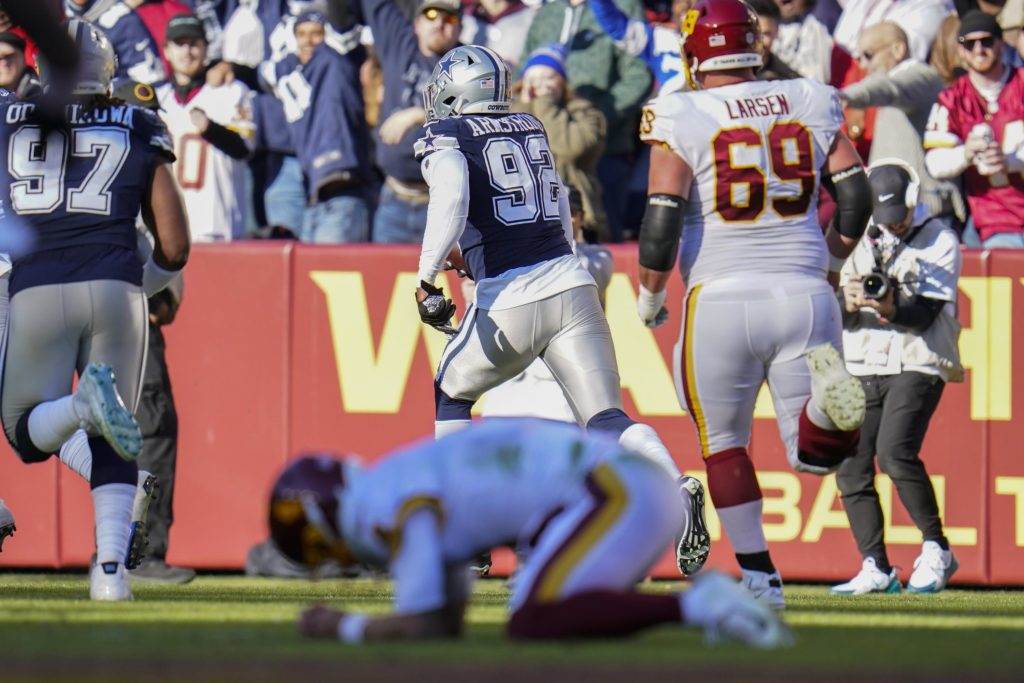 It was minor timing and communication issues on offense that stalled the Cowboys first drive, forcing them into a field goal attempt. Two plays that stand out from this drive were Dak Prescott's miss to Michael Gallup, and Amari Cooper's screen in the red zone. On the throw to Gallup, the receiver was given an inside release but allowed his defender to stay on top of him. This caused what should have been an easy throw into space for Gallup to sail incomplete. Gallup's best plays in this game came late in a down, as Prescott continues to look his way when a play breaks down. With their route concepts struggling to get Amari Cooper and CeeDee Lamb consistently open, locking in this timing with Gallup will be important in fixing the Cowboys offense.

On the screen to Cooper, Dalton Schultz missed his block in space that could have seen the play go for at least a first down and possibly six. This is an area Schultz has struggled in all season, and with the Cowboys regularly playing without one of both starting tackles, the outside run game has been nonexistent.

Tarell Basham and Dorance Armstrong put the pressure on Taylor Heinicke that led to Randy Gregory's tip drill interception. The Cowboys defensive line took over this game, and it's easy to get excited about the additions of Neville Gallimore and DeMarcus Lawrence together with Gregory. However, Basham and Armstrong have been filling in for injured players all season, and continued to prove why they should see the field at Washington. While Gregory got cut on the play, leaving him in the flat to intercept the pass, Armstrong got in Heinicke's face while Basham turned the corner to pressure from left end.

Dan Quinn has plenty of ways to dial up pressure with his current defense, and if the offense can build early leads like they did here, the Cowboys DL is capable of wrecking a game. Gallimore recorded a sack in his first game back, and fit in well at DT with rookie Osa Odighizuwa on the interior.

The best example all season of how much more valuable Micah Parsons is as a pass rusher than at linebacker came on Armstrong's fumble return touchdown. Parsons' A-gap blitz created a game changing play on fourth down, as he got home on Heinicke and forced a fumble that Armstrong returned for a score. When Parsons vacated the middle of the field, the mesh concept that WFT ran actually got open, but the speed of Parsons closing on the QB gave Heinicke no chance to throw.

Parsons would end the next WFT drive with another third down sack, making this his third game with at least two sacks for the rookie. 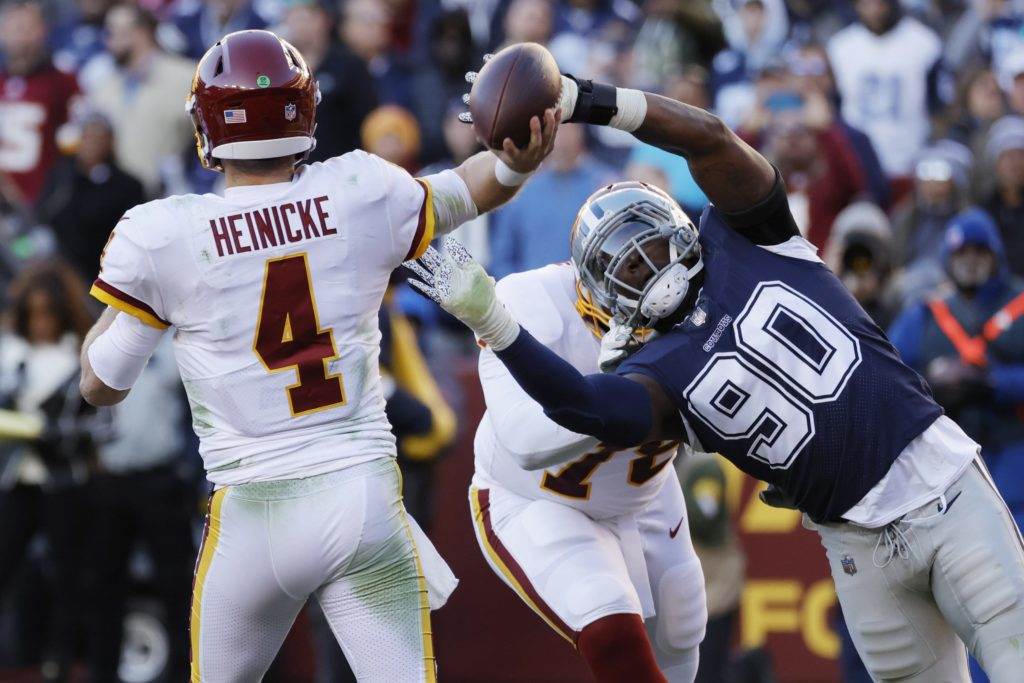 DeMarcus Lawrence gets a lot of criticism for not finishing plays, so it was great to see his get-off and sack in the third quarter. The Cowboys handed the ball back to their offense with a 19 point lead starting the fourth, as Lawrence's sack was the last play of the third and led to a WFT punt. Lawrence timed the snap perfectly and sped around the right tackle to finish at Heinicke. Plays like this paired with his ability to stop the run are why Lawrence has held down the left end position since his return, though the Cowboys feel good about using Basham here to give Tank some snaps off. Basham filled in at right end when the Cowboys didn't have Gregory, but plays with the right combination of speed and power to hold up at left end.

Prescott's fourth quarter pick six could have been avoided if he led Dalton Schultz into open space towards the sideline. Whether or not Schultz was supposed to stop his route, Prescott thought he had an easy completion over the top as he never saw Cole Holcomb underneath. Prescott has always been a better thrower when he can see his target open and deliver, but this pass would have easily gotten past Holcomb if it brought Schultz towards the sideline. As mentioned, it's these slight timing issues on offense that need to be fixed, but with more injuries shaking up the lineup and the division on ice the Cowboys could be lacking the reps they need to address this before the playoffs.

The Cowboys will see Washington again in just two weeks, after this Sunday's road game at the Giants. New York has done little to fix their own offense after firing OC Jason Garrett, losing their second straight 37-21 to the Chargers this week.

This should be a game the Cowboys defense can prove they're capable of carrying this team at full strength, as well as one the offense finds itself in – having scored 44 points the first meeting vs. the Giants.

Giants have folded, they will not fight. Our defense can go full metal jacket on them. May only need 1 offensive TD and a bunch of Zuerlein FGs in this one. I wonder if Pollard is done for the season???