How Did the Dallas Cowboys Fare in This Year’s NFL 100?

Every year, NFL Network releases a “Top 100” list of all the players in the league. What's special about this list is that the voters are actually fellow NFL players. We have tons of rankings from analysts and scouts all year long, so it's fun to see what the persons who actually put on shoulders and helmets week after week have to say about their peers.

However, that's precisely what makes it very controversial among fans. Year after year, we see players getting underrated and players getting ranked way ahead than they should.

Take Dak Prescott in 2017, for example. The young quarterback put on a show as a fourth-round rookie that no one could have expected from him. As impressive as he was, it's hard to defend him being ranked as the fourteenth best player in the NFL, which is how he was ranked in the NFL 100 last year.

This Monday, the 2018 Top 10 will be announced on NFL Network at 7 PM CT, but no Cowboys' name will be mentioned.

So, without getting frustrated about this year's results, let's take a look at how the Dallas Cowboys fared this time around. 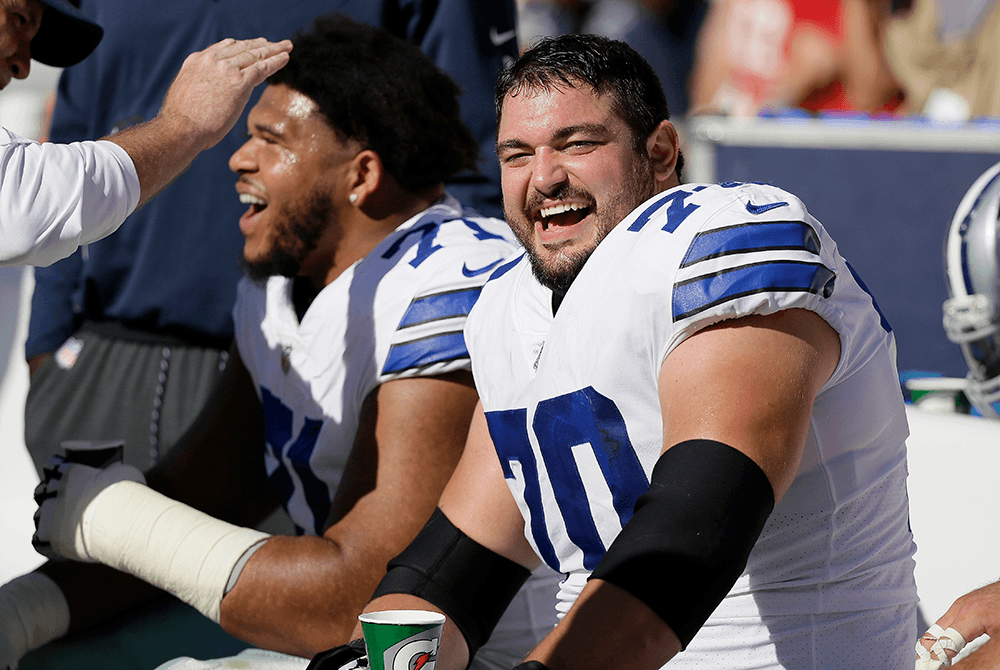 I'm pretty sure that Zack Martin doesn't even care about the NFL 100 list, especially after he became the highest-paid guard in NFL history just days ago. For the Cowboys, even with Tyron Smith and Travis Frederick on the same offensive line, Zack Martin might be the best lineman on the roster. At the very least, there's an argument to be made.

It's not very surprising to see Martin all the way at #71. Offensive guard is a very overlooked position by many, so it does make a tiny bit of sense for him to be ranked where he is.

What is surprising though, is the fact that Pittsburgh Steeler David DeCastro is ranked at #44. Both players are great guards, but Martin is widely acknowledged as the best at his position. Maybe playoff success came into account?

Ezekiel Elliott stumbled quite a bit this year, which is completely understandable. First of all, the 2016 season was electric. The narrative of two rookies taking the league by storm and earning the #1 seed in the NFC was unique.

Things changed for the superstar running back in 2017, though. Elliott had to deal with tons of off-field drama while fighting a six-game suspension that ended up being upheld and Zeke had to miss some time.

This is undoubtedly what made Elliott, who is easily a top three running back in the NFL, fall all the way out of the top 50. Despite having had pretty good years, I can assure you that Kareem Hunt (ranked at 33) and Mark Ingram (43) are not even in the same tier as Zeke.

I'm not going to lie, I'm not complaining about this one. Just like the rest of the offensive linemen, Tyron may be undervalued here. However, he is the best tackle on the list, so it's certainly tough to be mad about this.

Besides, don't forget Tyron didn't play the entire season after being out for three games. Not saying that makes him a worse player or anything, but it helps make sense of his spot on the list.

With former Cleveland Brown Joe Thomas enjoying retirement, it's easier to see Smith as the clear-cut best tackle in the NFL today. He's a beast. If he finds a way to play 16 games next season, I'm sure he will climb the rankings in 2019.

Last but not least is the Cowboys' breakout player of the year. Lawrence finally proved his worth getting to the opposing quarterbacks 14.5 times on the year. Not to mention, his game against the run was pretty remarkable and he helped take the defense to another level.

This was the first season in D-Law's career in which he remained completely healthy all along and it showed on the field. Thanks to his performance, the team handed him the franchise tag and hopefully he'll get a big, juicy contract once he continues dominating this year.

Six defensive ends were ranked ahead of him, so we will have to wait and see if he keeps it up in 2018 after being named a second team All-Pro in 2017.

The one thing that is outrageous from this year's list is the absence of Travis Frederick. I understand there aren't any other centers on the list, but they should at least include the best at his position, right?

Frederick is undoubtedly one of the most valuable players on the Cowboys' roster and a player that through five years in the league, has been to the Pro Bowl four times. One of the NFL's finest, he definitely deserves to be on that list.

But hey, as previously mentioned, this list is meant to be fun. It's cool to hear what the players (teammates and rivals) have to say about one another during this series. Instead of taking it as an official ranking or anything of the sort, it's better to see it as a fun piece of content by NFL Network.

Let me know what your thoughts on these rankings are on the comments section below or tweet me @PepoR99 to talk some football!

Mauricio Rodriguezhttps://www.facebook.com/PrimeroCowboys/
I love to write, I love football and I love the Dallas Cowboys. I've been rooting for America's team all the way from Mexico ever since I can remember. If you want to talk football, I'm in... You'll find me at @MauNFL.
Previous article5 Winners from Dallas Cowboys OTAs and Minicamp
Next articleDallas Cowboys Hoping to Bring Scouting Combine to The Star in Frisco