How Losing Jason Witten Hurts the Most

The retirement of Jason Witten reminded me of Gerry Bertier from Remember the Titans. Coach Herman Boone (played by Cowboys fan, Denzel Washington) said that after Gerry's accident “You cannot replace Gerry Bertier.” I think the same can be said about Jason Witten.

Jason Witten is a future Hall of Famer, and a Cowboy for life. He has clearly not been the same player that he once was but he was always there giving his all. One thing I will miss about watching Jason Witten play is watching him play with my Grandma and hearing her yell “Throw it to Witten!” at the T.V.

He was everything you want from a player and he did it for 15 years. Hopefully the team has been preparing for this because he did so much for the team that it may take more than one player to fill the role.

As much as fans may miss Witten, no one will miss him more than the team will, especially this season. The truth is that even though he was a seasoned veteran, Jason Witten left some enormous shoes to fill, in more ways than one.

For all the talk of Witten's receiving skills diminishing, his blocking skills never really did. He was a consistently good blocker. Whether it was Ezekiel Elliott, DeMarco Murray or Marion Barber, Jason Witten was essentially a sixth offensive lineman.

In Jason Witten's 15 seasons, the Cowboys were top-10 in rushing five different times. These seasons featured different quarterbacks, different running backs, and different coaches. The one constant was #82.

Witten's skills as a blocker are probably one of the main reasons why he was never released or even moved down the depth chart. Despite all his wear and tear, he was always a top blocker.

To be fair, it's not that Witten's catching ability has diminished. Dak Prescott still heavily relied on Witten in his first two seasons as the quarterback. Witten's biggest issues are that he hasn't been able to separate the way he used to be able to, and his speed has gone down hill in recent years.

As far as being a simple target, only during his rookie season did Witten not catch at least 60 passes. He averaged 69.2 receptions in the last five seasons, and never averaged less than 8.9 yards per reception in his career.

Witten has the fourth most career receptions in NFL History (1,152) and has 12,488 yards. He may have lost a step, but he never lost his hands. The current tight ends on the Cowboys roster need to be able to pick up the slack in the passing game if the team hopes to have any success. The team was spoiled to have Witten's sure hands but now they'll need to find it elsewhere. 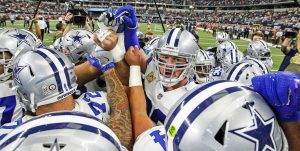 Perhaps Jason Witten's biggest contribution was his leadership on and off the field.

Witten's passion for winning has always been there. Whether it was getting in the face of Dez Bryant for messing up, or hugging Tony Romo after a game-winning touchdown, Witten's presence was there.

On the field, Witten not only was a vocal leader, but a leader by example as well. I don't know if there's a better example of this than the famous play of Witten getting his helmet knocked off against the Eagles and he kept running. It had become obvious to every Cowboys fan the type of leader Witten was, and his teammates have benefited from it.

Off the field, Jason Witten is a Walter Payton Man of the Year winner. He is a philanthropist who through his SCORE Foundation has created 14 Boys and Girls clubs. He is also invested in community shelters, dealing especially with kids who have lived through domestic violence. All of which stemmed not only from his hard childhood around his abusive father, but also as his motivation for getting people who have experienced it, to be able to deal with it.

Very few players in NFL history have ever led by example on and off the field the way Jason Witten has. To not only be a great football player, but an even better man, is amazing to come by.

The Dallas Cowboys and the fans have been spoiled to have 82 as long as they did. Now it's a changing of the guard, and the team needs to be ready. After all, Jason Wittens don't grow on trees.

Shane Carterhttps://dawgpounddaily.com/author/scarter1/
Lifelong Cowboys fan, who doesn’t mind telling the harsh truth. I’ve got a Bachelors Degree in Electronic Media and Communications from Texas Tech University. I welcome all opinions but I will shut down any troll.
Previous article
Did the Dallas Cowboys Find 4 Starters in the 2018 NFL Draft?
Next article
Witten Retirement Finally Removes “Tuna” From Cowboys Roster