While we've yet to see anyone in a real game this season, there are early signs from training camp, preseason, and other sources of whose stock is rising on the Dallas Cowboys roster. One player that has quietly but clearly ascended is Defensive Tackle Quinton Bohanna, who may now have a much larger impact on the defense in 2022 than we expected.

Back in April, some assumed Bohanna might not even be on the roster this year after Dallas drafted John Ridgeway in the 5th round. With Neville Gallimore and Osa Odighizuwa the assumed future at the defensive tackle, Carlos Watkins as veteran depth, and Trysten Hill still lingering about, Bohanna felt like the early odd man out.

That assumption didn't allow for Quinton, a 6th-round pick in 2021, to take a big step forward in his second season. But it's starting to look like that's exactly what the Kentucky product has done.

A few weeks ago, David Helman made the following observation:

I try not to make too much of practice rotations, especially at a rotation-heavy position like D-Line. But it’s impossible not to notice how much time Quinton Bohanna spends as the first-string 1T.

After years of struggling against the run, getting a bigger body in the middle of the defensive front is a logical step for Dallas. Bohanna is listed as 6'4″ and 360 lbs. on the team's official website; easily the largest man current on the payroll.

But size isn't everything. Raw power can make up for some technical issues, but being effective against high-caliber offensive linemen requires skill on top of physicality.

Apparently, Quinton has been adding technique to his natural traits. It led to this surprise a few days ago when the Cowboys released their first unofficial depth chart of 2022.

Cowboys first depth chart … Tyler Smith is the No. 1 left tackle. Of course Michael Gallup listed as starter at moment too and he’s not playing this week. pic.twitter.com/NUJXxFnjgG

It went unheralded by Todd Archer, but notice Bohanna listed as a starting DT along with Odighizuwa. From projections that had him not even making the roster, or at least being at the bottom of the depth chart, this is a dramatic leap for Quinton.

If you had any thoughts about this being an oversight, typo, or some sort of intentional misdirection, Micah Parsons threw some water on that with his own comments yesterday.

When Micah Parsons talked expectations for Cowboys defense that can "set a standard of how defense should be played," he mentioned young players and singled out one: NT Quinton Bohanna. "Like Big Q, I think he’s going to make a huge jump this year and be a dominant force for us."

Not Odighizuwa or Gallimore; Parsons called out Bohanna as an impact player among the young tackles. While Micah could be a little biased toward a guy from his own draft class, Dallas' defensive superstar generally doesn't mince words or play politics in his comments.

Taken together, all of this points to Quinton Bohanna making a surprising second-year surge. His coaches and teammates are clearly seeing something, and we hope to see it this Sunday night as the Cowboys open their season against Tampa Bay.

If nothing else, I need more of the nickname “Big Q” in my life. Let's keep that going!

That would be a welcome sight if “Big Q” has reached a new level of potential in year 2. It’ll definitely keep the linebackers clean and plug the biggest issue from last year’s team….STOPPING THE RUN! Thanks for the article. 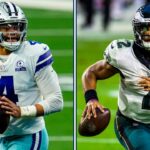