Just seven picks after taking Michael Jackson, the Dallas Cowboys decided to once again beef up their defensive line like they did with Trysten Hill. They selected another Jackson out of Miami, Joe Jackson that is with the 165th pick.

He was a consistently productive player for Miami. Racking up double-digit tackles for loss in each of his three years (35.5 total), including a carer high 14.5 in 2018, as well as 22.5 sacks over that time. He does come with a few flaws though. Once engaged, he doesn't always do well getting off blocks. He'll have to develop a go-to move and be better with his hands as well. Even with those shortcomings, there's something to be said about a guy with that level of production in a Power 5 conference.

With this selection, the Cowboys defensive end bodies have gotten that much stronger. We all know DeMarcus Lawrence is the prize piece of the bunch, he's the given. Robert Quinn is set to start opposite Lawrence. After that, however, there is some uncertainty. Former first-round pick Taco Charlton hasn't shown many signs that he's going to live up to being selected that high. Randy Gregory has the talent but just needs more opportunities, that'll come once he's back on the field some time in 2019. Kerry Hyder, Dorance Armstrong, and Tyrone Crawford will also be in the mix. Jackson will probably be seen more as a situational pass rusher and run stopper, but that doesn't mean he can't earn more time if he shows and proves.

Coming into his rookie season, Jackson definitely has a chip on his shoulder, saying this to the Dallas media. “Yeah, I'm not going to lie, everyone expected me to go higher. I thought I would go higher. Whoever gets me is taking a chance on me, so I'm going to prove them right,” Jackson said.

Well, young man, the Cowboys took their chance, now it's on you. Diamonds in the rough happen all the time in the NFL, we'll see if Joe Jackson is one of those. 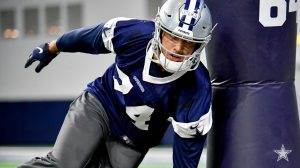 The Cowboys once again showed their dedication to dominating the line of scrimmage with their final selection in the 2019 NFL Draft, taking Oregon Defensive End Jalen Jelks.

He would redshirt his first year on campus in 2014. As a freshman in 2015, he saw action in 11 games, and even though he only managed to record 9 tackles, 3 were sacks. As a sophomore is when Jelks showed flashes he could be a player in a reserved role. Only playing in 8 games, he would rack up 31 tackles and 2 sacks. 2017 would be his breakout and most productive season at Oregon, with 59 tackles (15 for loss), 7 sacks, and 7 passes defended in 13 games. His junior year would be capped off by earning second-team All-Pac-12 honors. His senior season saw his production drop slightly, but with 56 tackles and 3.5 sacks, he still managed to achieve first-team All-Pac-12 honors.

He has a long and thin 6'5 256-pound frame. That lack of mass causes him to get bottled up and doesn't allow him to keep contain on the edge. There are some positives, though, in his game. He spent some time on the interior, showing he not only has the mental but physical toughness to play defensive line in the league. Even though he's thin, he is very physical at the point of attack. Lateral quickness is also a huge plus for Jelks. Once he can combine that with doing a better job of shredding blockers, he can improve his run-stopping skills, which need some fine-tuning.

It's an uphill battle for both of these young men to find a spot on the roster for 2019. Training camp is upon us and now it's time for them to truly earn that star.