Only eight teams remain alive in the race for the Super Bowl. Among them are the Dallas Cowboys, who recently defeated the Seattle Seahawks in the NFL's Wild Card round. It was a huge win for the NFC East champions against Pete Carroll and Russell Wilson, a duo with tons of postseason experience, including a Super Bowl victory. This was a team win, but one guy in the organization might be the biggest winner of the 24-22 victory.

Cowboys Head Coach Jason Garrett has been constantly doubted by fans and analysts alike. Last Saturday night, he made a great statement for himself and his future with the franchise.

Let's talk about his recent history with the team first, shall we?

For many years, the Cowboys' head coach has been widely discussed by many fans and analysts around the league. His career in Dallas has had a lot of ups and downs and unfortunately very little postseason action.

In the last three years, though, it's kind of hard to ignore what he's done. If you look at the big picture, it's actually not easy to argue the team would be better off with someone else at the wheel. Since 2016, the Dallas Cowboys are 33-17. That's a 66% winning percentage. That ranks fourth in the NFL in that period, only behind the New England Patriots, Pittsburgh Steelers, and Kansas City Chiefs. That's despite missing Ezekiel Elliott for six games and Tyron Smith for three weeks in 2017.

The Dallas Cowboys have won the NFC East in three of the last five seasons. And who knows what could've happened if Tony Romo hadn't been out in 2015. I'm not sure there's a coach out there who would've found success with such a QB carousel that featured Kellen Moore, Brandon Weeden and Matt Cassel.

And of course, we must talk about Jason Garrett's record in the playoffs. Before Saturday's game, Garrett had a mediocre 1-2 record. Even the total of three postseason games is disappointing. The Cowboys' head coach really needed to remind everyone that he is in fact able to win in January. He managed to do just that last Saturday versus a playoff-experienced coach in Seattle's Pete Carroll. He's now at 2-2 in his career.

He was able to lead his team to victory in a back-and-forth low scoring game that was coming off a 6-1 streak before the playoffs. The Seahawks weren't able to shine doing what they do best, which is running the football. The Cowboys were prepared for the big stage and handled the game pretty well. In an intense match, Garrett's team was more dominant than what the scoreboard says and did what they've done against strong teams.

They dominated the time of possession with a strong running game and an elite defense. With a playoff win under their belt, the Cowboys are now headed to Los Angeles to face the two seed Rams in the Divisional Round.

Not to mention the team started the season 3-5 and didn't quit. The mere fact that they're still in it after such a start is impressive. Garrett has been a huge factor in the Cowboys' turnaround of the 2018 season and should receive a big round of applause for that. Time and time again, we've witnessed how his players never quit on him or the team. That's really special.

They didn't do so when they were losing 21-3 in the playoffs versus Green Bay. Despite it resulting in a loss, the Cowboys came back to tie it 31-31 before losing to a game winning field goal. We've talked a lot about how Dak Prescott having a lot of comeback wins and game winning drives. Well, those shouldn't be QB stats only. They're a team stat… a coaching stat.

Let me say that I myself have questioned Garrett's job a lot. This is not the first time I begin to regret that either. What Garrett needs to prove now is consistency. His future will definitely not be decided by next week's outcome against the LA Rams, but it'd be great for him to continue to rack up postseason victories and give this team a shot at a championship.

Who knows if Garrett will remain the Cowboys' coach for long. But for now, it's hard to make many arguments against him. We can talk about his 8-8 seasons from long ago, but that doesn't seem to make any sense to me. Since 2014, the Cowboys have been a different team.

However, they still lack something and that is postseason success. This is the year to turn that around. The Cowboys have gotten their first win of the playoffs but they surely hope to play a lot more football. For now, on to the Rams… 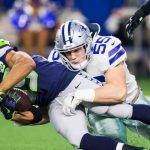 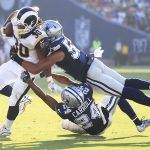