Kelvin Joseph, Nahshon Wright Give the Cowboys a Bright Future at the Cornerback Position

The Dallas Cowboys lost veteran Chidobe Awuzie to free agency in March. That left Jourdan Lewis, Anthony Brown, and 2020 second-round pick Trevon Diggs as the only stabilizing forces at the cornerback position heading into the 2021 season.

As the Cowboys entered the NFL Draft back in April, the thought was that they would snag one of the top-two cornerbacks available in Patrick Surtain or Jaycee Horn with the 10th overall pick. They would come off the board with the eighth and ninth picks, but all hope wasn't lost though at the cornerback spot. Kelvin Joseph out of Kentucky was selected with the 44th pick in the second round, and Nahshon Wright, a virtual unknown was taken with the 99th pick in the third round.

Although one played at multiple college programs and the other wasn't on many people's radar, it comes down to whether or not you have the skill set to contribute on the professional level, and these two young studs can do that. 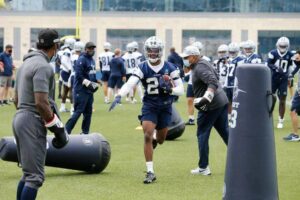 Joseph started his college career at LSU in 2018. He played in 11 games but only managed 12 tackles and a pass breakup. Unfortunately, he was suspended ahead of the team’s bowl game and entered the transfer portal. After sitting out a year due to transfer rules, Joseph resumed his collegiate career at Kentucky in 2020, and in just one season he showcased his ability by racking up four interceptions which were tied for second in the SEC.

However, he opted out with one game left to focus on the NFL Draft, making some question his commitment when factoring in what happened during his days in Baton Rouge. The former four-star recruit put that bed however back in May when the subject was brought up.

“People are going to doubt regardless,” Joseph said, via the team's website. “I’m just trying to get to work with my team and go win a Super Bowl. As far as people talking about commitment issues, I’m all in. I’m with my team.”

Joseph stands at just under six feet tall. He ran a 4.34 in the 40-yard dash, posted a 35-inch vertical jump, and a 10'8″ in the broad jump at his Pro Day. Although the Cowboy's new Defensive Coordinator Dan Quinn prefers big corners on the outside, the length and athleticism of Joseph make up for it.

What Joseph is lacking is experience. He only played 20 games on the collegiate level. Also, he went through a 10-day quarantine during OTAs that set him back a little. He's facing an uphill battle to get significant playing time opposite Diggs, but he's up for the task at hand.

“I'm excited and I'm ready to face the challenge,” Joseph said last month. “I feel like I put in all this work all my life, just to get to this point and I'm here surrounded by good coaches. And they're going to get me ready to take this task at hand and get me ready to be successful with it.” 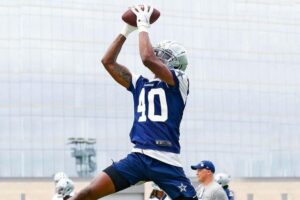 Wright began his college career at Laney College in Oakland, California in 2018. He logged 12 starts and tallied four interceptions while garnering all-conference honors and helped the Eagles win the state title. He would transfer to Oregon State in 2019 and had a pretty productive career with the Beavers.

Wright started 12 games as a sophomore and logged 34 tackles, three interceptions, a pass defended, and a half-sack. Although his junior season was reduced to seven games due to the COVID-19 pandemic, Wright had his best overall performance. He amassed 30 tackles, two interceptions, four passes defended, a sack, and a forced fumble while receiving honorable mention All-Pac-12 honors.

Despite not being a hot commodity in the draft, Wright has turned heads during OTAs and minicamp. So much so that Head Coach Mike McCarthy raved about his play earlier this month

“He’s made some plays,” McCarthy said, via the team's website. “There are some technique things, which we all are going through right now at pretty much every position. But yeah, I really like the way that he’s jumped in here. He’s been aggressive, competitive. Definitely what you’re looking for in your young guys.”

Wright has physical attributes you can't teach. He may only weigh 185 pounds due to his thin frame, but he stands at 6'4 with a 78-inch wingspan. That height and length fit the prototype for what Quinn likes at the cornerback position. Also, with 4.4 speed in the 40-yard dash and wide receiver instincts from his high school days, Wright has a strong foundation to work with while he continues to translate his game to the NFL.

The third-rounder is now turning his attention to training camp which will be the true test to measure what he's learned up to this point. The transition to the professional level has been a good one so far for Wright and he's taken bits and pieces from more experienced players.

Wright has the slight edge over Joseph as the biggest challenger to Brown who is currently the favorite to start opposite Diggs. Regardless of how that plays out, the Cowboys have set themselves up with a nice cupboard of talent at the cornerback spot with Joseph and Wright for the foreseeable future.

I don’t need to cool nothing down. It’s my opinion, if you don’t agree that’s cool but I have my own mind and have my own thoughts

I agree Matthew Lenix… And you can’t listen to that Don Howard guy, he’s always on here saying something stupid and negative!! Anyways….
In my opinion, from what’s been said about Nahshon Wright already in OTA’s and mini camp, I think he’s already better than Brown is!! Which isn’t saying much now that I think about it, but it’s obviously an upgrade!! And as far as Kelvin Joseph goes, I think he’s gonna be our starter opposite of Diggs, if not day 1, definitely before the end of the season!! It shouldn’t be too hard to beat out Brown when it comes to the outside corner position, Brown just really isn’t that good out there, he’s just better in the slot in my opinion!! But I’d prefer Jourdan Lewis in the slot, so unless Brown just all of a sudden turns into this shut down corner, we really don’t need him, except for maybe depth!! But who knows, maybe I’m wrong….. Only time will tell!! I can’t wait for training camp and preseason to find out!!

Exactly. All the coaches AND the media are acting like everyone they drafted is a lock to make the team. All I can say is Quinn better make THESE players work in his system. And he’s got the vets he got from ATL. I just wish they would move Cox to FS. He can’t do any worse than the predecessors and he could be GREAT at FS.