It was no secret that the Dallas Cowboys were expected to go heavy on the defensive side of the ball in the 2021 NFL Draft, and that's exactly what they did. Eight of their 11 selections went to rebuild a unit that was the second-worst in the NFL against the run and gave up the most points in franchise history (473) in 2020.

By drafting Osa Odighizuwa (DT), Chauncey Golston (DE), and Quinton Bohanna (DT) the Cowboys are showing there's a commitment to the trenches, but they made the biggest splash on the second level of the defense. Penn State's Micah Parsons, the draft's best linebacker and overall defensive prospect, was taken with the 12th overall pick after the Cowboys missed out on cornerbacks Jaycee Horn and Patrick Surtain. On Saturday, they got tremendous value by adding LSU's Jabril Cox in the fourth round and set the groundwork for a new direction at the linebacker position. 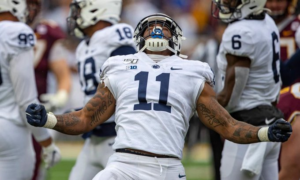 Parsons opted out of the 2020 college football season due to COVID-19 concerns but that didn't change what we saw from him for two years with the Nittany Lions. In 2018, Parsons only made one start but led the team with 82 tackles, becoming the first freshman in program history to do so. As a sophomore, Parsons put his name alongside the best players on the collegiate level as he registered 109 tackles and being named First-Team All-Big Ten, a Consensus All-American, the Butkus-Fitzgerald Linebacker of the Year, and Defensive MVP of the 2019 Cotton Bowl (ironically played in AT&T Stadium).

Although he spent a year away from the gridiron Parsons would impress at his Pro Day. At 6'3 and 245 pounds, he would run an impressive 4.39 in the 40-yard dash, posted a 34-inch vertical jump, and 10'5″ in the broad jump. Needless to say, he's a freakish type athlete.

During his days at Penn State, Parsons displayed a terrific ability to make plays sideline to sideline thanks to his speed that was previously mentioned, which also allowed him to be one step ahead of blockers as he shot through gaps as a great run defender and blitzer up the middle. Also, he rushed the passer from the edge with success. He'll need to work on his coverage skills, but he's more than NFL-ready right now. Simply put, he isn't a one-trick pony by any means, which he mentioned during his Pro Day.

“I just feel like I’m the most versatile player in this class,” Parsons said. “I can play middle linebacker, I can play outside, and I can pass-rush. I don’t think there’s a place I can’t play in the linebacker spot or whether it's defensive end on the field. I’m going to utilize my skill and I’m gonna just make plays happen as I did at Penn State and show these guys why Penn State breeds the way we do. We always do this. We show up in big-time plays and big-time moments. We're trained for this.”

During his introductory press conference, Parsons noted that his ability to do so many things on the field is what got him to Dallas.

“That's the reason why they selected me,” Parsons said, via the team's website. “I don't think you can be one-dimensional in this league today, with how many good backs there are – receiving backs and tight ends that are going out to the slot. I think me being versatile could have me here for a long time.” 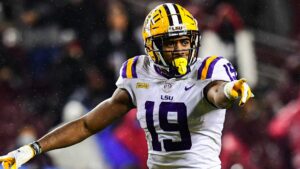 The selection of Cox was an absolute steal for the Cowboys considering he was looked at as a Day 2 guy and not a fourth-round pick. During his high school days in Missouri, Cox played not only linebacker but quarterback, wide receiver, cornerback, and safety, making him as well-rounded of a player as you could find. He started his collegiate career at North Dakota State, and he wasted little time making an impact once he stepped on the field.

After 75 tackles as a redshirt freshman in 2017, he had over 90 in his sophomore and junior seasons. He finished his three-year career at North Dakota State with 258 tackles (32 tackles for loss), 14 sacks, and five interceptions while helping them win three consecutive FCS National Championships. He wasn't short on individual accolades either as he was named the Missouri Valley Football Conference's Freshman of the Year (2017), a three-time all-conference performer (Second-Team in 2017, First-Team 2018-2019), and Defensive Player of the Year (2018).

Cox would transfer to LSU as a graduate student for the 2020 season and continued his high level of play. He finished third on the team with 58 tackles (6.5 tackles for loss), a sack, three interceptions (ran one back for a touchdown), five passes defended, and a fumble recovery. Much like his new teammate Parsons, Cox had a really good showing at his Pro Day by running 4.52 in the 40-yard dash, a 34-inch vertical jump, and 10'3″ in the broad jump. He measured at 6'3 and 232 pounds.

The Cowboy's newest linebacker will need to work on diagnosing plays on the next level but there's a lot to like about his game. His range is outstanding as he can pursue plays from the backside to the other side of the field with his speed. What sets him apart from most linebackers is his amazing coverage skills. During his college career, Cox only gave up two touchdowns and intercepted eight passes in 1,114 coverage snaps according to Pro Football Focus.

Playing against better competition at LSU helped Cox prepare for the pros, as he articulated recently.

“It helped me as a player overall regardless of the situation I was in,” Cox said. “I think it helped flourish my skills and be able to compete at a high level and that’s something that’s needed entering the NFL.”

Once he was selected, Cox was direct in explaining what the Cowboys were bringing into their locker room.

“The Cowboys are getting a high-character, versatile player,” Cox said. “Someone who can do multiple things for them on the defense, be able to play special teams, coming in packages in all three downs; just being anything that the coach would want. I just want to help Dallas win and reach that high Super Bowl status that they've always been at.”

With the Cowboys bringing in Parsons and Cox it puts two veterans at the linebacker position, Jaylon Smith and Leighton Vander Esch, on notice that its open season on who gets the opportunity to make plays for the Cowboys defense in 2021. Smith is coming off of a down year, to say the least, and Vander Esch missed six games with collarbone and ankle injuries, and the team still hasn't decided whether or not they'll pick up his fifth-year option (have until Tuesday to do so).

New defensive coordinator Dan Quinn has to be chomping at the bit with what he can do with Parsons and Cox from a versatility standpoint. Both can not only make plays against the run but also in space and out on the edge.

A new era is starting at linebacker in Dallas led by Parsons and Cox, and both should contribute big during their rookie campaigns.

I love it , it gives us depth we need at LB , with Cox and Neal, we got good coverage LBs , we got a good zone coverage and length with LVE, and we got a pass rusher in Parsons.

With that versatility we got good depth as well , which is much needed with LVE.

Our future at LB is looking good again

Right on! Van Jaylon better step up, or take their show elsewhere.

It’s show up! or shut up time for the Cowboys defense

The pick of Cox also likely helps our cap in 2022 as drafting he and Parsons virtually assures one or LVE or Smith is not on the team after the upcoming season as it makes sense from a cap perspective not pay both with Parsons and Cox on board, I don’t see either becoming busts.

Love this new direction we have at LB. Also don’t forget to add Neal to this mix too. With Parsons, Neal and Cox that’s a solid LB group to have. Smith and LVE are on Hugh alert for sure

I guess the staff took Jaylons advice and finally watched the tape.

Ironic that Jaylon is the only one that doesn’t have a clear eye view.

What in the world was the coaching staff doing last year to allow this guy to get thru an entire season thinking he was doing a good job.

I defend Jerry alot, but he has kind of wrecked this kid with that contract, not to mention the cap.

Very glad we have some other options coming in. Too bad we never got even a peak of Bernard or Gifford.

I’m so glad the Cowboys may be about to move on from Jaylon Smith and Vander Esch. Vander Esch maybe could be serviceable. Jaylon is too physically limited in my opinion. He seems so confused on the field. The sooner he’s relegated to Special Teams the better. The next move is to cut him and move on!!! 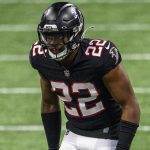 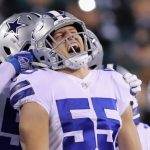