The Cowboys' big cushion in the NFC East has broken down a little in November. WIth Dallas losing two of its last three games and both Philadelphia and Washington on two-game win streaks, things are getting a little more interesting in the division race.

The 6-1 record that Dallas brought into the current month is now 7-3 with ugly losses to the Broncos and Chiefs in recent weeks. While they have been legitimately shorthanded at key positions, especially this past Sunday in Kansas City, the Cowboys have been doing too much excuse making lately and need to find their offensive rhythm again.

Thankfully, Dallas still has the edge and especially thanks to a potential head-to-head tiebreaker over the Eagles. They may need to cement that tiebreaker by beating Philly again in Week 18, but hopefully that game isn't even relevant by the time we get there.

The Eagles have injected some life back in their season with consecutive wins over the Broncos and Saints. While neither is the cream of the NFL crop this year, both are average teams and Philly should feel some positive momentum with these victories.

Similarly, Washington has picked it up lately with victories over Tampa Bay and Carolina. With no clear favorites in their remaining schedule other than the Cowboys, could the Football Team go on another late-season run?

In other news, the Giants came off a bye week and lost 30-10 in Tampa Bay last night. So yeah, it's business as usual in New York.

Moving into Week 12, the Cowboys have two Thursday games coming that suddenly feel way more critical than they did a few weeks ago. Hosting the Raiders on Thanksgiving and then traveling to New Orleans next week, Dallas has to right the ship or else they could quickly find themselves in a division dogfight with Philly.

The Eagles get a leisurely two-week trip to New York with upcoming games against the Giants and Jets. If their current momentum holds and the NY teams play at their usual level, Philadelphia could easily be 7-6 before their late Week 14 bye and the final four games on 2021.

Washington will host the struggling Seahawks on Monday Night Football in what could be a season-changing game. A win keeps them around .500 and in the playoff conversation. A loss drops the Football Team to 4-7 and probably gets people looking toward the offseason.

The Giants' only relevance at this point is what they can do to play spoiler in the NFC East. They still have two games left against the Eagles and one more with Dallas and Washington. All Cowboys fans should be rooting for them this Sunday. 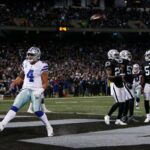 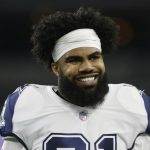