Talk that the Cowboys would run away with the NFC East may have been premature. Thanks to a four-game win streak and the Cowboys' recent struggles, the Washington Football Team is now just two games behind Dallas ahead of the rivals' first 2021 meeting in Week 14.

A late field goal lifted Washington over the Las Vegas Raiders yesterday and improved its record to 6-6. With four-straight victories since their bye week, highlighted by the Week 10 upset over Tampa Bay, the Football Team has positioned itself as a potential NFC wild card team and gained ground on Dallas in the division.

Things could be worse for the Cowboys. They started December with a road win in New Orleans and are enjoying a 10-day break before their first game against Washington. With head-to-head wins already over New York and Philadelphia, Dallas could establish a commanding lead in the NFC East with a win this Sunday.

The Eagles got a gift yesterday in the form of the New York Jets. They suffered the loss of QB Jalen Hurts without incident and enjoyed strong play from backup Gardner Minshew. In fact, Minshew looked so competent that Philly may have to consider its short-term prospects as a viable wild card contender.

Meanwhile, having to play Mike Glennon at QB due to Daniel Jones' neck injury, the Giants had no offense in Miami and have nothing but slim mathematical hope left at this point.

The Cowboys' upcoming trip to Washington is a significant one for more than just the NFC East. Dallas is still within striking distance of Arizona, Green Bay, and Tampa Bay atop the conference but now has Washington and Philadelphia reasonably close in the division and in the wild card race.

Washington would need more than just this week to catch Dallas but could at least get a firm hold on a wild card spot with a victory. With two games against the Eagles and one with the Giants left on the schedule, success against the Cowboys could easily propel them to the playoffs.

The Eagles will finally get their bye week and with good timing given Hurts' injury. The chance to rest up before four remaining rivalry games is critical for Philly and potentially trouble for the rest of the division.

New York's descent into draft-focused thinking will likely continue with a road game against the Los Angeles Chargers. Daniel Jones isn't expected back yet, but hard to say that would really matter given the Giants' overall state.

Ok Cowboys you better come into this game focusing on not only squeaking by but with the attitude of trying to score as much as possible on this no name WFT because they are primed and ready to play us and try to take control of the NFC East one game at a time! No more excuses it’s time to put up or shut up! 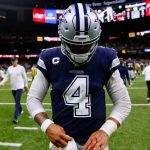 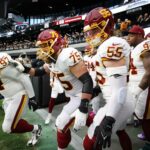