ESPN has long been considered “The Worldwide Leader in Sports,” and for a long time that title was justified. If you wanted your national sports news, where did you turn to but the cable sports channel to watch that day’s episode of SportsCenter. But over the last few years, it’s become more and more clear that it’s “The Worldwide Leader” in name only.

The ratings are dropping and the network has had to make a lot of business decisions as it relates to much of their on-air talent over the last several years. With their latest under 25 starting 22 — ahem, troll job — they seem to have finally come to terms that they are basically First Take.

Noah Brown put it best in his reaction to the ESPN “Insider” voting that led to Saquon Barkley being named to the starting 22 ahead of Ezekiel Elliott. Brown, Elliott’s teammate when both were at Ohio State University, came to his defense upon seeing the list. 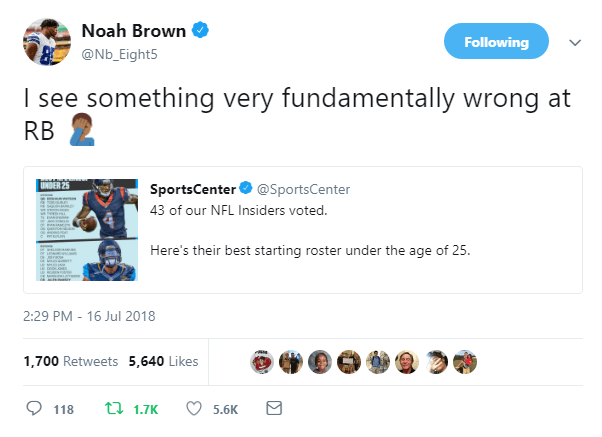 43 of our NFL Insiders voted. Here’s their best starting roster under the age of 25.

I’m sure there could be debates about different positions on the squad. Personally, quarterback is one where an argument could be made for Carson Wentz or Dak Prescott over DeShaun Watson, but that’s for another time.

But to have a rookie, who has never played a down in the NFL ahead of the NFL’s league leader in rushing for 2016, Ezekiel Elliott, is laughable.

The fact that they had 43, again I use the quotations, “Insiders” vote on this and Ezekiel Elliott wasn’t listed as one of the two running backs just shows you how far they’ve come as a network.

Ezekiel Elliott’s yards per carry is a healthy 4.63. Todd Gurley sits at 3.93. No player with more than 1,800 rushing yards over the last two years has a better yards per attempt than Ezekiel Elliott.

I get that you’d vote Todd Gurley in there, but to not have Ezekiel Elliott, arguably the game’s best running back on your Under 25 starting 22 just makes you look like Skip Bayless or Stephen A. Smith. Not a sports journalism entity worthy of people throwing money at for “Insider” access.

I won’t say that I never or will never watch ESPN, because where else am I gonna go for Monday Night Football, Todd Archer, or the NCAA Men’s Lacrosse Championships? When I’m at my father-in-law’s, I’ll watch SportsCenter first thing in the morning, because it will be on and you don’t change another man’s television.

“The Worldwide Leader,” however, loses credibility when they promote a list like this that has such a glaring omission.

Perhaps, maybe the goal wasn’t to put out an accurate list. Maybe the goal was to get us talking about their list, just like when NFL Network releases their Top 100 players list. Like they say, there’s no such thing as bad publicity.

This troll job from ESPN has certainly gotten them some publicity, or should I say, notoriety.