In a passing league, you can never have too many cornerbacks. The Dallas Cowboys find themselves in an interesting situation this offseason with a few corners set to hit free agency as unrestricted free agents, Bryon Jones, and Anthony Brown. The former will command top dollar on the open and may price himself out of Dallas, while the latter could see himself return being that his price tag wouldn’t be high.

This uncertainty makes the corner position one to keep an eye on early in April’s NFL Draft. There have been reports that the Cowboys could double-dip in the secondary in the first two rounds, with safety likely being the first pick if true. In round two, however, there’s an interesting name to watch that could be available if the Cowboys want to add another piece at cornerback, Ohio State’s Damon Arnette. 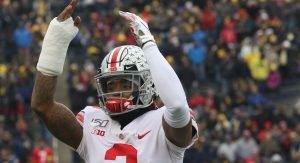 What makes last season more impressive for Arnette is that he did it while playing with a broken wrist, that he himself didn’t know about until after the third week of the season when he had an MRI done. He suffered the injury during a preseason practice when he tried to punch the ball out of his teammate J.K. Dobbins’s hands and his wrist was bent backward.

Arnette is a natural cover corner with the speed and size you want at 6’0 195 pounds. He’s very versatile, showing the ability to play on the outside and in the slot. Physicality is also a part of his game when you watch his tape. He’s a willing run defender and has good ball skills.

Projections on Arnette have him being selected anywhere from late in the first round to an early third-rounder (mainly because of character concerns). He’s a very talented player with a huge upside and a name to keep an eye on in April.