The failure of the Cowboys offense to produce any type of, well, offense does not fall on just one man's shoulders. This has been an organizational failure from top to bottom, starting with their offensive philosophy and trickling down to every player on the field.

With that being said, we still must evaluate the plays and players as they happen. Dak Prescott is the quarterback of the 2018 Cowboys. Whether or not he will, or should, be the quarterback beyond that is in question, but he has his chance to answer those questions over the next 13 games.

Prior to watching the film of Sunday's loss to Seattle, I expected to be disappointed in Prescott's play. The live viewing was not pretty, and the passing game has been horrendous thus far. After watching the All-22, however, I actually didn't think he was terrible.

No, he wasn't good, but the pieces around him continually let him down when he did find ways to make correct reads and good throws. Whether it was Ezekiel Elliott, Tyron Smith, Zack Martin, or the entire receiving corps, the offense was a complete disaster from the first snap of the game.

I wanted to break down one play in particular, however, to highlight a consistent problem I've seen with Prescott through the first three weeks of the season. And, to be honest, we've seen this issue since the nightmare game in Atlanta last year. The problem? Holding onto the ball too long and not trusting himself to make throws into relatively tight windows.

Let's start with the All-22 of this snap. The Cowboys are in 11 personnel, with Cole Beasley in the slot and Ezekiel Elliott flanking Prescott in the backfield. From the looks of it, Prescott is given two options on this play. One, he can simply hand the ball to Elliott who will be led by multiple pulling linemen. Or, two, he can pull the ball and throw to Beasley on the slant route.

Pre-snap Prescott's read becomes clear. The Seahawks are plus-1 in the box, and running when at a box disadvantage is never ideal. Seattle is showing a single high look and looks to be in man-free coverage. Prescott should be thinking “pull and throw” before the snap even happens.

Prescott is reading the WILL here (#56 to Beasley's side). If he steps forward to play the run while already at a box advantage, this should be a quick completion. If he stays home to account for the pull, then the Cowboys should be able to beat him to the front side with Elliott as they'll regain the numbers advantage.

Once Prescott gets the snap and puts the ball in Elliott's stomach, the linebacker steps forward and puts himself in a bind. 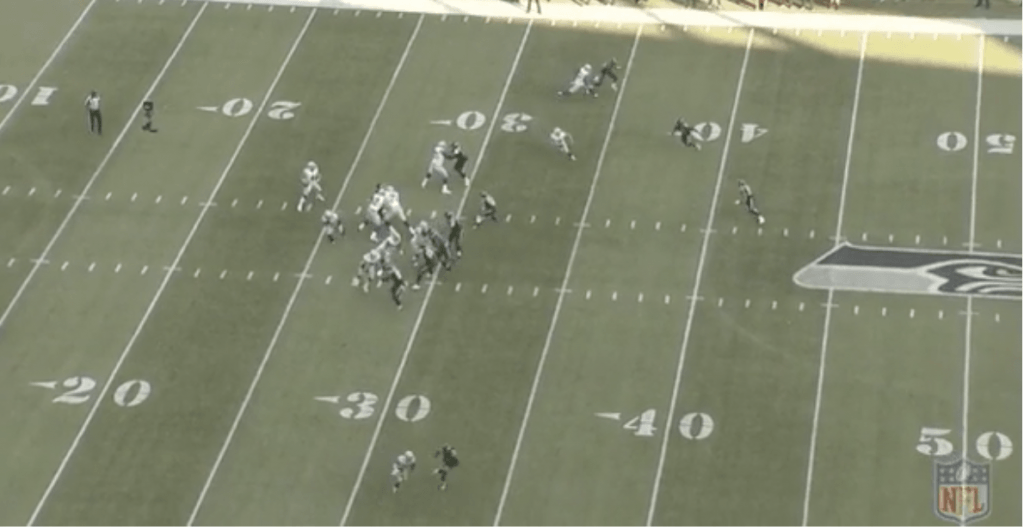 Dak Prescott correctly pulls the ball and looks to throw to Beasley quickly. The slot defender is about 7 yards off of Beasley in soft coverage, and the underneath linebacker has stepped towards the line of scrimmage to honor the run.

This is a completion waiting to happen, and exactly why RPO's and packaged plays are becoming so popular around the NFL. Instead, Prescott does not trust himself to hit that window, and looks scared of the linebacker recovering to intercept his pass.

Prescott double clutches the ball, allowing for pressure to get to him and force him into a scramble. Still, he actually delivers a decent throw under duress to Beasley, but the ball falls incomplete.

While this probably gets graded as a pressure, this should have been an easy completion for at least a decent gain through the air. Prescott has to get rid of the ball quicker and be more decisive when making his reads.

Kevin Bradyhttps://kevinrobertbrady.wordpress.com
Die-hard Cowboys fan from the Northeast, so you know I am here to defend the 'boys whenever necessary. Began writing for a WordPress Cowboys Blog, and have been with ITS since 2016.
Previous article
Snaps Judgment: Notes from Cowboys Week 3 Loss
Next article
The Dallas Cowboys Aren’t Fooling Anyone At All With Offense, Coaching

In your video, I see a scheme that bunches all the pass catchers within 12 yards of the LOS. Further everyone is “running to a boundary”, which means eventually they run out of room. Take the same play, run the slot WR up the field, pulling his covering DB and most likely the S with him. More importantly freeing up the outside WR to run a cross in largely a vacated area.

Or run the outside WR on a slant with the slot running an out. Again, instead of 3 defenders covering 2, you put our players in a 1 and 1 situation. Good lord if I can see these, what in the wide wide world of sports is Scotty thinking???? High School teams run more sophisticated passing offenses.

Complete a couple passes and suddendly they can not go +1 in the box, Zeke has more room and play action far more effective.