As the Dallas Cowboys are busy putting their roster together for the 2020 season, a potential major contributor has now become available. After a long wait, Defensive End Randy Gregory has finally been reinstated and will be able to play starting in the Week 7 game against Washington.

Gregory missed the entire 2019 season under indefinite suspension following repeated violations of the NFL's substance abuse policy. He had six sacks in 14 games for Dallas in 2018.

The reinstatement is being called “conditional” by the league.

The NFL has conditionally reinstated DE Randy Gregory, sources tell me and @SlaterNFL.

#Cowboys DE Randy Gregory may report to the team Monday, but he won't be allowed to practice until Oct. 5 or play until after the team's Week 6 game, per @SlaterNFL and me.

Official word from the NFL on #Cowboys DE Randy Gregory’s conditional reinstatement, beginning with an acclimation and period and return to game action no sooner than Oct. 25 at Washington: pic.twitter.com/R4CBFfByAc

The Cowboys were already looking good in their pass rush with DeMarcus Lawrence being joined by veterans Everson Griffen and Aldon Smith. Getting Randy Gregory back will give them even more dynamic talent and options for various formations.

The 27-year-old Gregory took to his own social media after the announcement to thank those who've helped him get his career back.

Dallas should receive a roster exemption for Gregory until Week 7, as the league is mandating he's ineligible to play any sooner. That spot will likely go to third-year DE Dorance Armstrong, and then how the Cowboys make room for Gregory in October will depend on who's healthy and what other circumstances there are at that time.

For now, we can join with Randy in celebrating his return to football and to Dallas. No matter what he eventually does on the field, this is its own victory.

Gregory has shown the ability in the past to jump right in after a long lay off and have an impact. Should be in shape and ready to go by week 7. Just another bullet in the chamber for this D Line. Can never ever have enuf pass rushers. At week 7 should have good idea of the roster needs at that point (injuries, who is productive etc.) 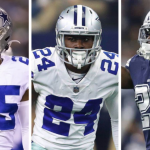 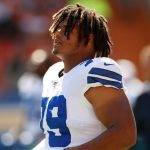